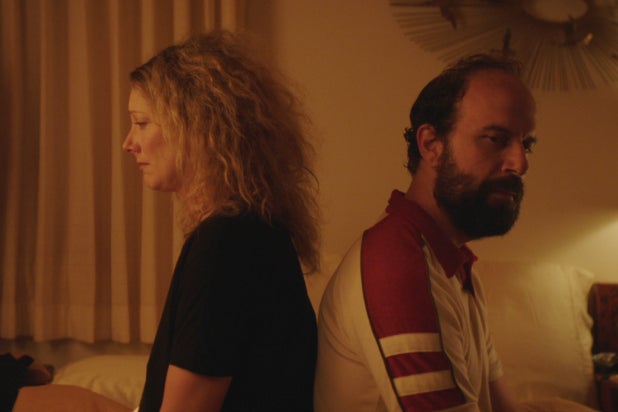 Brett Gelman (“Love,” “Another Period”) plays somewhat of a garbage white dude named Isaac in Janicza Bravo’s film “Lemon.” It’s not quite that he is a bad person; he’s just completely unaware of anyone other than himself. And he’s barely aware of himself.

For example, his response to waking up in the morning after wetting himself in his sleep is just to stand there and smell his hands, blocking his blind girlfriend Ramona (Judy Greer) from going to the bathroom, only to have her sit back down in the damp spot on the couch where he left his mark. He doesn’t see anything wrong with this.

Immediately after, Ramona tries to confront Isaac about how she’s feeling in the relationship, using the metaphor of a book she is reading. She needn’t even say she feels stifled because she’s barely able to get out what she originally intended to tell him; Isaac, obliviously, interrupts her, talks over her, belittles her. Unsurprisingly, this is one step towards the dissolution of their relationship.

It’s not necessarily accurate to describe what happens to Isaac post-breakup as karmic retribution, per se, primarily because his myopia never disappears. His selfishness, and inability to really communicate with a sense of empathy or awareness, is just who he is. Isaac is aggressively rude toward a female student in the acting class he teaches. He spray-paints a racial slur on the car of another student, Alex (Michael Cera), out of jealousy. He doesn’t particularly care about the wellbeing of his sister Ruthie (Shiri Appleby), and his approach to being, shall we say, sensitive about racial matters is decidedly gauche.

Isaac’s trashy identity — including how the little world he lives in is punctuated by overwhelming choral music — is like all the annoying sad-white-dude-in-an-indie tropes rolled into one absurd character. That’s a good thing. Bravo, whose previous work includes the lauded short film “Gregory Go Boom” and an episode of FX’s “Atlanta,” has crafted a film with a particular vocabulary that’s built using the language of small films about sad white men (think “Garden State”) but with a syntax that upends them. The film is at times, gloriously, viciously satirical, effortlessly able to paint the hollowness of performative emotions.

When Isaac’s childhood physician, Dr. Gold (David Paymer), breaks down in front of him, talking about his divorce, he does so at first coyly, but then he reveals cracks in the façade. But his façade is like cheap plaster, as though the cracking and breaking were the point, that the breakdown is the show. “The old you doesn’t work,” he tells Isaac in an attempt both to comfort Isaac and to get him to return the favor.

Conversely, Isaac’s displays of emotion come in shocking little explosions, whether it be an act of cruelty or vulnerability. Gelman is a straight man, his deadpan deliveries of Bravo’s alternatingly elaborately theatrical or deceptively colloquial dialogue like an ice pick. And while watching Gelman’s Isaac dig a grave for himself in any number of situations — like when he talks to a group of relatives of Cleo (Nia Long), who’s black, about incarceration rates for African American men — is amusingly cringe-worthy to watch.

His reactions to his misfortunes are even better, because they give Gelman room for his expressive body to let loose. He drops his cellphone in a diarrhea-filled toilet; he tries to steal a grandmother; and he screams in his car. In each, Gelman takes a character who looks like he’s been bound with rope and has very little joint articulation and makes his body blast beyond its presumed parameters.

Most of the white dudes in the film are some iteration of horrible, their mean and condescending archetypes from the same world as Isaac’s, but amplified. Even though Bravo spares him infrequently, there’s still a modicum of pathos there, a dash of tenderness every now and then; the scene in which he finds two birds dead features both ribald satire and sensitive empathy, which is hard to pull off, but each never cancels out the other.

Bravo’s West Coast world in the film is finely detailed: the way the sun sneaks into the windows to reveal a messy house, how it makes the yellows and peaches glow, or how it illuminates magic and beauty in every pore of skin from Cleo’s family, the gradations of their complexion shot as if to right the wrong of years of improperly photographed and film black bodies.

This is a filmmaker precise in her composition and in her texture, her comedic beats reminiscent of both David Lynch and Issa Rae. What the cookout scene towards the end of the film shows us is that there’s a world beyond the narcissistic one that Isaac and parts of his family occupy, and it’s beautiful and strange and has no time for nonsense. So get your act together.