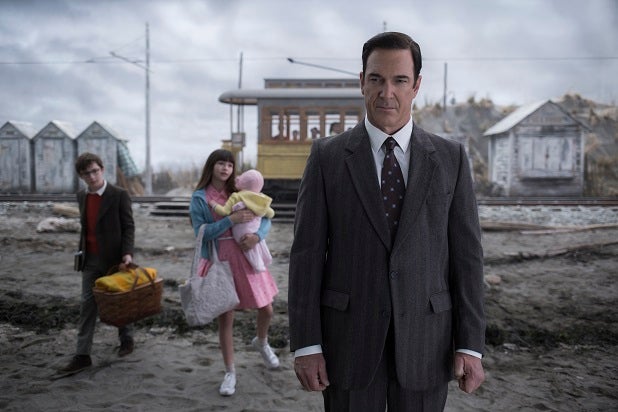 The meanings of words play an integral part of Netflix’s adaptation of “Lemony Snicket’s A Series of Unfortunate Events.” Words that mean more than one thing cause misunderstandings that can lead to everything from inconveniences to disasters, usually for the unlucky Baudelaire children.

Words matter so much that characters in “A Series of Unfortunate Events,” as well narrator Lemony Snicket himself (Patrick Warburton), are constantly defining them — sometimes with useful definitions, and sometimes with hilarious ones.

Here’s every term, saying, idiom or word defined in “Lemony Snicket’s A Series of Unfortunate Events” Season 1, along with the definitions that were given.

Also Read: 'A Series of Unfortunate Events:' How Many Seasons Will There Be?

Calamitous: A word which here means “dreadful” and “melancholy.”

Rickety: A word which here means unsteady or unlikely to collapse at any moment.

Festive: A word that means fun.

Infant: A word that means “a person of the age at which one mostly speaks in unintelligible shrieks, and most people had trouble understanding what she was saying.”

Perished: A word meaning “killed” (as in by a fire).

Applaud: A word that means “go like this” (with a demonstration of clapping, but with hook hands).

Executor (or executioner): A word meaning “person who controls people’s fortunes after a terrible fire has just happened.”

Closest living relative: A phrase meaning “whoever lives nearby.”

In loco parentis: A Latin phrase meaning “acting in the role of a parent.”

Standoffish: A word that refers to a person who, for various reasons, is not associating with others. It is a word that describes a person who, during a party, might stand in a corner instead of talking to another person. It would not describe somebody who provides one bed for three people to sleep in, forces them to do horrible chores, and strikes them across the face. There are many words for people like that but standoffish isn’t one of them.

Over and out: A phrase that is walkie-talkie slang for “goodbye.”

Curtains for your baby sister: A saying that means Sonny will be dropped out the window, but it’s also a sort of play on theatrical curtains.

Aberrant: A word meaning very, very wrong and causing much grief (as relates to the figurative direction the Baudelaires find themselves going in).

At large: A phrase meaning the authorities had not caught Count Olaf, and would not catch him for a very long time.

Bambini: An Italian word for “children.”

Misnomer: A word that means “a very wrong name.”

Dramatic Irony: A term for when a person makes a remark and someone who hears it knows something that makes the remark have a different, usually unpleasant meaning. For example, if I were to say “I can’t wait to eat this almond cookie,” but there were people around who knew the cookie was poisoned, that would be dramatic irony. For that reason, when we hear Uncle Monty tell the children, “I promise you, no harm will come to you in the Reptile Room,” we should be on guard for the unpleasant arrival of dramatic irony.

Conundrum: A word that means “mystery.”

Esoterica: A word which here means “obscure objects or documents.”

Hackneyed: A word which here means “Used by so many writers it’s now a tiresome cliche.”

Labyrinth: A word meaning “a maze full of secrets and danger, and if you’re in Ancient Greece, a monster that is half bull and extremely unpleasant.”

Audition: A word that is medical business slang for “autopsy.”

Doc: A word that is apparently medical business slang for “doctor.”

Corpse: A word which apparently is medical business slang for “dead body.”

Meanwhile back at the ranch: A phrase which here means “upstairs and about six minutes earlier, before the adults discovered the ghastly scene in the parlor.”

Retrieve: A word meaning “take away.”

Taxi: A word meaning “a car that takes you some place for a reasonable fee.”

Dowager: A fancy word for “widow.”

Real estate agent: A term for people who assist in the buying and selling of houses.

You can’t lock up the barn after the horses are gone: A saying that means sometimes even the best of plans will occur to you when it is too late, just as all of us are far, far too late to be of any help at all to the Baudelaires.

Brunch: A word for the combination of breakfast and lunch.

Fine print: A phrase which here means you might miss reading it until it’s too late.

Plethora: A word which here means too many to list (as in the various dangers of sailing across Lake Lachrymose in a hurricane).

“Schm”: One way to demonstrate you don’t care about something is to say the word and then repeat the word with the letters “schm” replacing the real first letters. If you didn’t care about truth and justice, for example, you might say “truth schmuth” or “justice schmustice.”

Unsupervised: A word meaning “without supervision.”

Partners: A word which means “equals,” and can also mean “two people who own a lumber mill together, or a cupcakery.” With the advent of more progressive cultural mores, not to mention certain High Court rulings, it could also mean, “I do all the work. He irons my clothes.”

Optimist: A word which here means “person who thinks hopeful thoughts about even the bleakest situations.” For example, if an optimist was to have his arm bitten off by an alligator, he might say “Oh boy, half-price manicures for life.” Whereas the rest of us would say “Ah, my arm.”

Catch more flies with honey than vinegar: A fancy way of saying you’re more likely to get what you want by acting in a sweet way, than in a distasteful way, like vinegar.

Bedside manner: A phrase that means “when a doctor speaks in a calm and reassuring voice to make sure his patients trust him.”

Inordinate: A word which here means “immoderate,” “irregular,” or in this case, that Violet missed Klaus a lot.

Seeing in black and white: A way of saying a person looks at the world in a way that is oversimplified and often incorrect.

Fatal: A word that means “caused the death of one person,” (as in the case of the accident at the Lucky Smells Lumber Mill).

There is a ridiculous number of original series available on Netflix right now — so many it's almost impossible to keep up with them. Even Netflix seems to have a tough time making sure its viewers know about its shows. We dug into the annals of Netflix series and plucked out the very best ones for your enjoyment. Here they are in order of great to phenomenal.