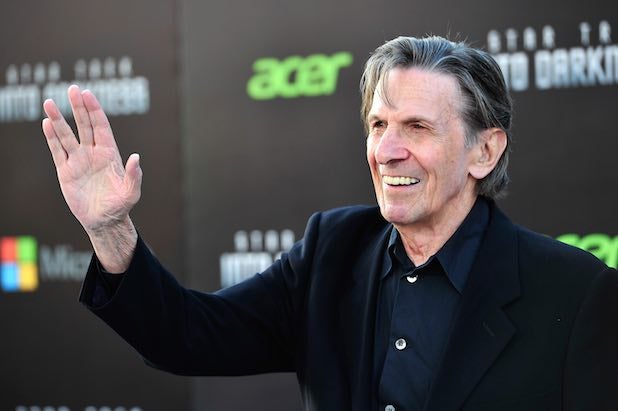 “Star Trek” actor Leonard Nimoy passed away on Friday morning, and Hollywood and the rest of the country quickly responded with personal statements and posts to Twitter in honor of the man who played Mr. Spock in the iconic science-fiction franchise.

His fans included President Obama, whose statement began, “Long before being nerdy was cool, there was Leonard Nimoy … I loved Spock.”

From the show-business community, Seth MacFarlane tweeted a reference to the fictional planet that regenerates life in “Star Trek”: “Leonard Nimoy brought us one of the greatest, noblest characters in the history of American storytelling. Someone find the Genesis planet.”

Many of the actor’s personal friends and close colleagues, including a number of his “Star Trek” co-workers, issued statements.

William Shatner, who portrayed “Star Trek” Captain James T. Kirk, said, “I loved him like a brother. We will all miss his humor, his talent, and his capacity to love.”

Rod Roddenberry, CEO of Roddenberry Entertainment and son of the legendary “Star Trek” creator Gene Roddenberry, said, “The death of Leonard Nimoy is indeed an immense loss to us all. I only hope that during this difficult time we can all take comfort in the everlasting impact he has made. As Spock he portrayed the first Roddenberry character, an outsider who truly let us see ourselves. Leonard Nimoy’s talent allowed millions to learn more about who we are and who we want to be. I will always thank him for that.”

George Takei, who played Sulu in the “Star Trek” series, said on Facebook: “Today, the world lost a great man, and I lost a great friend. We return you now to the stars, Leonard. You taught us to ‘Live Long And Prosper,’ and you indeed did, friend. I shall miss you in so many, many ways.”

And Zachary Quinto, who took on the role of playing the young Mr. Spock in J.J. Abrams‘ reboot of the franchise, wrote on Istagram, “My heart is broken. I love you profoundly my dear friend. And I will miss you everyday. May flights of angels sing thee to thy rest.”

“A true legend and a wonderful human being,” said John Noble, who costarred with Nimoy in Fox sci-fi series “Fringe.” “I was extremely honored to work with him. Very sadly missed.”

Anna Torv, who also appeared in “Fringe” alongside the actor, said, “How fortunate was I to share a call sheet with the elegant and gentle legend that is Leonard Nimoy. Nobody put it better than the man himself. You WILL be preserved and loved in memory by all who crossed your path. I am amongst the lucky ones — who will miss you dearly.”

“He was a remarkable man, well known not only for his acting and directing, but also for his photography, contemporary art collection, and for his extremely generous philanthropic contributions and support of the arts,” Bob and David Gersh of the Gersh Agency, Nimoy’s longtime agency, noted.

Actor Steve Guttenberg, who appeared in Nimoy-directed 1987 hit film “3 Men and a Baby,” said, “Leonard Nimoy was smart, warm and had a personality that made everyone feel comfortable. He was a talented actor, director, poet and photographer. But his most enduring quality was his kindness and his desire to make you the most you could be. Like everyone who knew or knew of him, I will miss him.”

“Leonard was a good friend and a fine director. His contribution to ‘Three Men and a Baby’ could never be overstated,” said actor Tom Selleck.

On Instagram, James Franco posted a photo of Nimoy in “Star Trek” and wrote, “❤️  to Spock.
ICONIC.”

Ben Stiller called the actor “Seriously one of the coolest people ever.”

“Of all the souls I have encountered in my travels, his was the most… Human.” Farewell, Leonard Nimoy – Actor, Director, Pop culture icon. — KevinSmith (@ThatKevinSmith) February 27, 2015

Over time you hear all kinds of things about all kinds of people. I never heard anything but the loveliest love for Leonard Nimoy. RIP — mia farrow (@MiaFarrow) February 27, 2015

.@thesimpsons #everysimpsonsever As I am registering for comicon so sad to hear Leonard Nimoy passed. A great man on and off camera. — Al Jean (@AlJean) February 27, 2015

I am devasted to learn that #LeonardNimoy has passed. Despite your passing your legacy will indeed #LiveLongAndProsper. — Josh Gad (@joshgad) February 27, 2015

Awful about Mr. Spock. RIP Leonard Nimoy, who was a paragon of virtue & reason and played one on TV. — Geraldo Rivera (@GeraldoRivera) February 27, 2015

Leonard Nimoy brought us one of the greatest, noblest characters in the history of American storytelling. Someone find the Genesis planet. — Seth MacFarlane (@SethMacFarlane) February 27, 2015

#LeonardNimoy was supposed to outlive us all. so very sad. — moby Ⓥ (@thelittleidiot) February 27, 2015

. @TheRealNimoy I have been, and always shall be, your fan. Thank you. — Nathan Fillion (@NathanFillion) February 27, 2015

I shall truly miss Leonard Nimoy. He gave us a great gift that will last for ages. A good soul and kind man. RIP