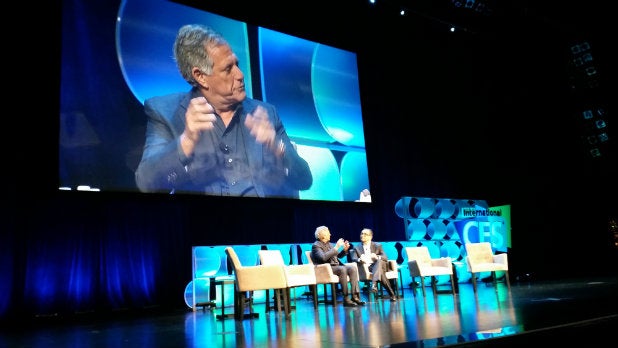 “Overnight ratings are worthless right now,” Moonves told MediaLink CEO Michael Kassan. “We have to be more patient. Our information is now coming from so many different places, over much longer time.”

He then married technology — which is clearly the theme of CES — with the “content is king” mindset that permeates the business he works in, television.

“For many years, technology and content were at war,” he said. “There wasn’t language, wasn’t goals. Now it’s changed drastically … working so closely hand-in-hand.”

Then Moonves touched on some of his high-profile new employees for 2015, and how they may boost Nielsen numbers in one timeslot where CBS could use the help.

“We’re looking to late-night guys — Colbert, Cordon — that’s going to make a huge difference, to our ratings, certainly our measurement systems are antiquated,” he said. “How we make decisions is very different than we used to.”

“Data is great, it helps influence decisions — it can’t be the only thing that influences decision,” Moonves said. “In television, you can kill someone off next week. The day that stops is the day machines will be making our content. And we can’t let that happen.”

“The whole system has changed,” he concluded. “The people who haven’t changed 10 years ago, three years ago — are out of business. They’re not getting on with it.”