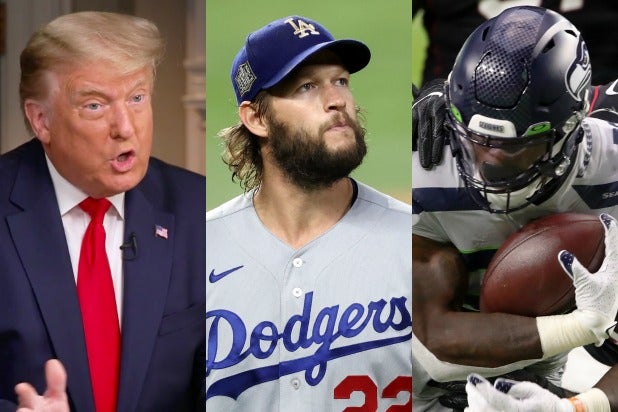 Updated at 10:33 a.m. PT with final Nielsen ratings: With 16.82 million total viewers, Lesley Stahl’s “60 Minutes” sit down with Donald Trump was the CBS newsmagazine show’s most-watched episode since its Stormy Daniels interview in 2018.

A good World Series Game 5 on Fox faced off against an even better NBC “Sunday Night Football” game last night, when football won once again. CBS was also a player on Sunday, when Lesley Stahl’s contentious “60 Minutes” interview with President Donald Trump landed a huge audience of 15.6 million following an afternoon NFL game.

Due to the nature of live sports, we’ll have to wait for final, time zone-adjusted numbers later today to really get a sense of how well Game 5, Seahawks-Cardinals and even the Stahl-Trump showdown performed.

NBC was first in ratings with a 3.1 rating/16 share in the advertiser-coveted 18-49 demographic and in total viewers with an average of 10.4 million, according to preliminary numbers. Those are the initial averages for three segments of “Football Night in America” and the Seattle vs. Arizona NFL game.

Fox was second in ratings with a 1.8/9 and third in viewers with 7.2 million. That was all the World Series pregame show and Game 5 itself, which the Dodgers won 4-2.

Previously, the largest audience for a “60 Minutes” episode this season was just north of 12 million viewers. That one also followed football.

The Stahl interview gained enormous attention after Trump cut short the pre-taped conversation, recorded at the White House last week. He then followed through on a threat to release the entire interview ahead of Sunday’s “60 Minutes” episode. Clearly the leak didn’t put a dent in the ratings.

Univision and Telemundo tied for fifth in ratings, both with a 0.2/1. Univision was fifth in total viewers with 894,000 viewers, Telemundo was sixth with 520,000 viewers.