Odom Jr. will portray Draemond, the owner of a string of charter schools in the area who pays a visit to Abbott. Weedman is playing Kristin Marie, a tough-talking teacher from a neighboring school who bears a striking resemblance to one of Abbott’s own (ahem, Lisa Ann Walter’s Melissa Schemmenti). Mejia is Ashley, a teacher’s aide at Abbott Elementary whose go-with-the-flow personality contributes to classroom chaos.

Fresh off of three Emmy wins — including Brunson’s historic win for Outstanding Writing for a Comedy Series — “Abbott Elementary” will return to ABC on Sept. 21, with a next-day premiere on Hulu. The workplace comedy follows a group of dedicated teachers who work under a chaotic and self-involved principal in an under-resourced Philadelphia public school. Despite having the odds stacked against them, the educators are dedicated to helping their students excel.

Brunson stars as the optimistic Janine Teagues and also serves as executive producer alongside Justin Halpern and Patrick Schumacker of Delicious Non-Sequitur Productions and Randall Einhorn. The cast is rounded out by Tyler James Williams as the straitlaced Gregory Eddie, Janelle James as principal Ava Coleman, Chris Perfetti as the ever-anxious Jacob Hill, William Stanford Davis as janitor Mr. Johnson (who was just upped to series regular) and Emmy winner Sheryl Lee Ralph as veteran teacher Barbara Howard. The series is produced by Warner Bros. Television and 20th Television, a part of Disney Television Studios. 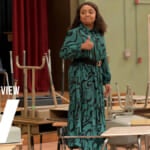 Speaking to TheWrap in a recent interview, Schumacker teased an upcoming cameo in Season 2, saying, “The show has garnered a lot of attention and celebrities are interested in cameoing in the show. We’re trying to maintain that purity of Season 1 and maintain that documentary feel and treating it as real as possible. It’s tempting to succumb to that sort of interest and we have a cameo in the first episode of Season 2 that’s a big, big surprise. But, for the most part, we’re keeping it like Season 1 as much as possible.”