Now that we’re running low on daylight hours, you’ll be happy to know that there are plenty of new reality shows to watch (you know, in lieu of breathing in that pesky fresh air).

In fact, three debuted just this week on what I like to call the “third-tier” networks of the reality world. (That means that they’re not one of the Big Four, but they’re not Bravo either.)

The shows could not be more different from one another, yet they are each fabulous in their own way. 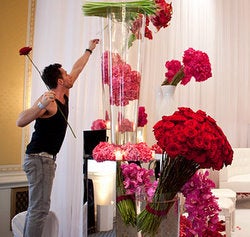 “Flowers Uncut” premiered last night on TLC. It follows Jeff Leatham, former artistic director for the Four Seasons Paris, as he moves to New York to bring his floral artistry to the Big Apple.

At first I wasn’t sure what this show was doing on TLC. After all, there was nary a midget, multiple nor monkey baby to be found in the first episode! But then I remembered TLC’s other “Pillar of Randomness.” No, not child beauty pageants — weddings. Of course! Flowers = weddings.

Leatham and his (Dutch maybe?) assistant Mat are nice enough, but the real stars of this show are Jeff’s modern yet beautiful designs. No wonder Eva Longoria Parker hired him to do her wedding! (If you missed that bit of info, don’t worry; it seems to come up repeatedly.)

I’m hoping that as the season goes on, Leatham will come out of his shell a bit more and provide some non-floral drama. After all, let’s face it: Flowers are pretty and all, but what we really want in a reality show is “character.”

Over on VH1 this week, two celebrity shows premiered. “Sex Rehab With Dr. Drew” aired on Sunday, while “I Want to Work for Diddy 2” debuted Monday.

While it’s difficult and insensitive to make fun of a show about addiction, I will certainly try.

It is sometimes very hard to watch. I must say that these “celebs” are all very brave to go through treatment on camera.

The real star, as always, is Dr. Drew, who could give Barbara Walters a run for her money in a “making celebrities cry” competition. I have to admit that I have a little crush on him and wouldn’t be surprised if some of his patients become fixated on his, um, bedside manner.

Sean “P Daddy Puff Diddy” Combs’ show is a little more lighthearted, though I’m not sure he’d say the same. Once again, Diddy is looking for an assistant and has to choose from a pool of applicants, including a pageant queen (of course) and both an Ebony AND an Ivory (their real names).

This is Diddy’s version of “The Apprentice,” the difference being that the tasks are utterly ridiculous and the participants are utterly stupid. For instance, upon arrival, all 11 contestants are forced to sleep outside in a parking lot before going on a surprise interview the next morning with Puffy himself. Wow, they must really want to work for Diddy (or be on TV).

Additionally, Puff calls up each team on their special direct-line red phones in the middle of tasks to ask for things like 60 white balloons or Puff Daddy cologne from the Sean John store.

It is silly and mindless entertainment, but I can’t wait to see whom he chooses. Mark my words: Whoever it is will not be working for him by this time next year.

No, they’re not “American Idol,” but these shows and their multiple airings should keep you busy until the holidays . ..or at least until tonight when “The Real Housewives of Orange County” premieres!