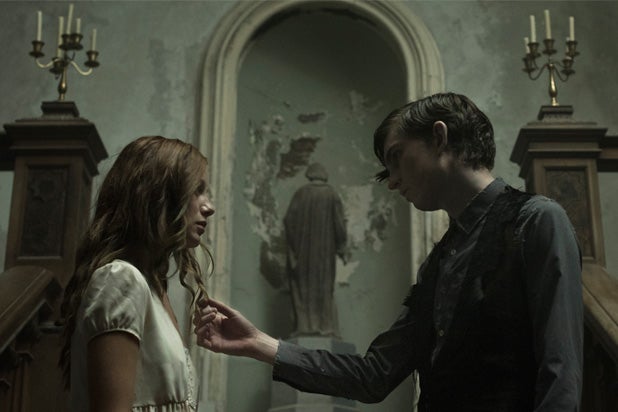 I followed my first feature, 2014’s “Let Us Prey,” with a Gothic horror fable called “The Lodgers,” which follows two orphaned twins named Rachel and Edward who inhabit a crumbling manor in 1920s rural Ireland.

“The Lodgers” — which premiered last week at the Toronto Film Festival — was made on very tight schedule, with 210 scenes shot in 22 days. In Ireland on low- to medium-films, shoot days are a strict 10 hours. If you go beyond that you owe the time back to the crew.

Despite that time pressure, “The Lodgers” was an absolute pleasure to shoot. And that’s in part thanks to some key lessons I learned along the way:

1. Plan everything in advance

When working on a modest or small budget, as many horror directors are, you simply can’t afford to throw caution to the wind and work it out on the day. Your best chance at making a successful film, with memorable and cinematic set pieces, is by planning those key sequences out shot by shot.

On the set sometimes things won’t pan out as you planned. That’s guaranteed. However with a design in place, conceived in the privacy of your home, without 50 crew members standing around waiting for instructions, you can then abandon your storyboards safe in the knowledge you’ve thought this through.

You know the beats. You know the keys shots you absolutely need for the sequence to work. And you can use those boards as reassurance that nothing essential is being forgotten or left to chance. Once wrap is called, there’s nothing more satisfying than knowing you can start the next days shoot without having to worry about coverage for the previous day.

In “The Lodgers,” there’s a scene where David Bradley enters the house at the bottom of the stairs, while Bill Milner slips away behind him. It’s a single shot, tracking toward David and wrapping around 180 degrees to see Bill disappear into the shadows.

It’s very cinematic, but also meant the entire scene was just one, slightly tricky camera set-up. This could easily have been several shots that took an hour to cover. However, having boarded the scene well in advance, with a plan for a single shot that would create a great sense of dread and threat, I was able to shoot this entire scene in the final 15 minutes of the day.

2. Don’t be too wed to your storyboards

When I look back on “The Lodgers,” and the 3,000 frames I drew, which covered every single scene in the film, I can now see I shot approximately 50-60 percent of the film as per the storyboards. The other 40-50 percent changed based on a number of factors.

Time then plays a huge part in how exactly you can execute your boards. A scene you designed to be done in 7 or 8 set ups may have to be done in only 30 minutes, so you’re down to 3 shots. When that happens you embrace the space and the excellent cast, and you find a way to shoot it much more efficiently whilst retaining your vision. This for me is the most satisfying part of filmmaking as it feels you’re discovering the scene in a whole new light.

3. You can do visual effects on a budget

You can do anything you like if you have an infinite amount of money. But my experience is that budgetary restrictions force you to think outside the box when it comes to VFX, and this can often result in a much more interesting film.

In an earlier draft of David Turpin’s script for “The Lodgers,” the climactic sequence involved flooding three stories of the house. It was pretty spectacular and we had every intention of shooting it. I boarded the sequence and then we explored everything from using miniature sets to complex water VFX. After a great deal of research, planning and testing, we realized to pull this off effectively was beyond the means of our budget.

So David set about writing something that would not only be much more cost effective but which would also be far more strange and surprising. The end result is in the film, and looking back now I feel what we have is much stronger.

And this really is the key to shooting VFX on a budget. Rather than trying to compete with huge Hollywood films, or refusing to alter your vision, find a way to use a mixture of simple practical effects, and uncomplicated VFX to create something much more inventive and surprising. The audience will thank you for doing something they haven’t seen before, no matter how little the cost.

4. When shooting underwater, leave nothing to chance

The underwater portion of the “Lodgers” shoot represented the biggest challenge. When you’re underwater, everything is moving and there are no solid A to B marks for cast and camera to hit. So the process is incredibly slow and imperfect. If you imagine you typically aim to shoot approx 30 set-ups per day on a single camera shoot, you can expect that figure to be a maximum of 10-15 when shooting underwater. Fortunately, we had shot a promo for the film the previous year where we experienced this slow pace, so we approached the main shoot with this in mind.

Through storyboarding and rewriting, David Turpin and I pared the underwater sequences back to their bare essentials. The boards represented the minimum we needed to tell the story, and anything beyond that would be considered a bonus.

This allowed the producers to schedule the underwater shoot with military precision, and over the few days we spent in the swimming pool we shot like clockwork, getting each shot within its allocated time. Underwater shooting doesn’t lend itself to the looser approach you can use when shooting drama. There’s no time to explore a scene and see where it goes. You need a plan, a schedule, and an assistant director who ensures everyone follows it to the minute.

"Starry Eyes" (2014) Written & directed by Kevin Kolsch, Dennis Widmyer
Cool imagery, solid performances, and a harrowing take on how far a person will go to become a star. Available to rent: Amazon Video, YouTube, iTunes
View In Gallery
BIO Brian O'Malley
Brian O'Malley is a director whose first feature, the Gothic horror movie "Let Us Prey," won the Melies d'Argent for Best European Fantastic Feature Film at the Belgium International Fantastic Film Festival in 2014. His second feature, "The Lodgers," premiered at the Toronto Film Festival in 2017. He also wrote and directed the short films "Crossing Salween" (2010) and "Screwback" (2005).

Brian O'Malley is a director whose first feature, the Gothic horror movie "Let Us Prey," won the Melies d'Argent for Best European Fantastic Feature Film at the Belgium International Fantastic Film Festival in 2014. His second feature, "The Lodgers," premiered at the Toronto Film Festival in 2017. He also wrote and directed the short films "Crossing Salween" (2010) and "Screwback" (2005).