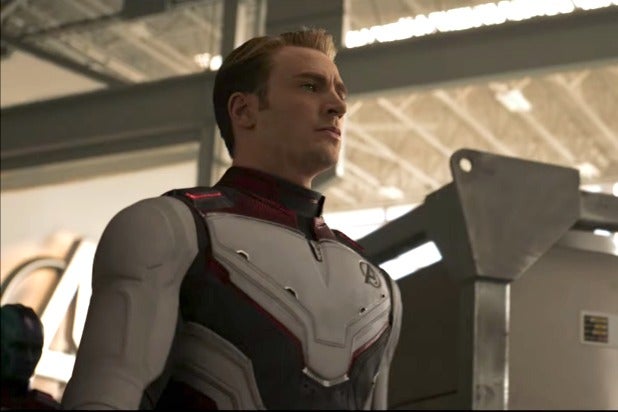 So a few months back we spotted some leaked toy designs that indicated that our heroes would be sporting some very future-looking white uniforms in “Avengers: Endgame,” and that leaked turned out to be completely legit as the third trailer for the impending megablockbuster (you can watch it here) ends by showing  most of the surviving Avengers wearing exactly that.

It’s also notable who we don’t see wearing them: Thor (Chris Hemsworth), Rocket (Bradley Cooper), Bruce Banner aka the Hulk (Mark Ruffalo) and Captain Marvel (Brie Larson). We have no context for this scene, whether it happens early on or late in the movie, but it’s worth pointing out that in the brief shots we get of our heroes fighting in what looks like a thoroughly war-torn landscape –which feels like a climax-ish situation — none of them are wearing these things.

Now, you may be tempted to think these uniforms are just an aesthetic choice, but I don’t think that’s the case. I think there’s an actual practical reason for the Avengers to pop these things on, and it involves travel into the Quantum Realm and/or through time.

It’s fairly well known at this point among the nerds that “Avengers: Endgame” will delve into some previously unused fantastical comic book mechanics to try to undo Thanos’ snap that killed half of everyone in the universe — specifically, time travel. And so they would likely need some kind of suit tailored to that use since that kind of thing isn’t an innate ability. Like how Ant-Man has to wear his suit that was specifically made for shrinking and enlarging himself if he wants to, you know, shrink or enlarge himself.

And if the Avengers are going to travel through time, perhaps by using the Quantum Realm as a shortcut (remember that line about a “time vortex” from “Ant-Man and the Wasp”), then it stands to reason that they would need special suits to actually do that.

But this is all still speculation, of course. Marvel is doing a pretty great job of not giving away anything even while including all these seemingly revealing shots. But that’s par for the course — they literally put Tony Stark crying over Spider-Man’s ash pile in one of the “Infinity War” trailers and nobody was the wiser about it.

So we’ll see. We’re only a month and a half away now. “Avengers: Endgame” lands in theaters, as you probably know, on April 26.