Those who watch a lot of television might be tempted to assume that just because a show has spaceships or superheroes in it, it could be defined as "nerd-friendly television." We’ll define that term to mean a show aimed at an audience that values the odd "Star Trek" joke or supernatural event.

I’m a member of the target audience for said nerd-friendly television, and don’t find the term nerd to be terribly offensive. Personally, I interpret it as a label defining the way in which I and others approach certain shows — as complex, evolving and entertaining beasts that demand or deserve our full attention.

But in truth, the qualities that define shows that might appeal to audiences previously devoted to shows like "Battlestar Galactica" or "Buffy the Vampire Slayer" don’t always involve genre. 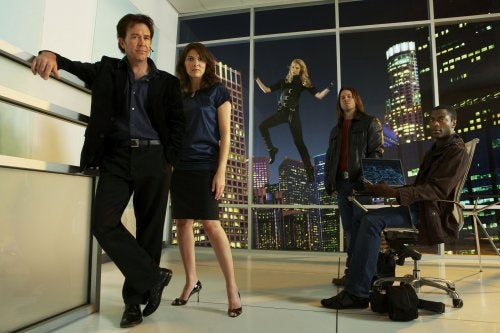 In fact, on the surface the shows in question might be the most conventional possible programming. Because while a series like "The Big Bang Theory" puts its geeky subject matter on full display, some of the nerdiest shows on television are surreptitious about their potential appeal to those unsatisfied by standard rote procedurals.

As a case study, let’s examine the series "Leverage," the second season of which is currently airing on TNT. On the surface, the show doesn’t indicate any sort of genre leanings, instead combining "Robin Hood" and "Ocean’s Eleven" for a fresh take on the world of con artists and thieves.

However, I and many others were initially made aware of the show when it launched because one of its creators, screenwriter and blogger John Rogers, had previously taken a stab at adapting the comic book series "Global Frequency" for television, and the writer of said comic book, Warren Ellis, reached out to his audience to encourage them to watch the show.

I didn’t start watching the show until finding it a few weeks ago on Netflix instant streaming, but I quickly found myself incapable of not catching up as quickly as possible. It’s addictive television, and not just because of the quality of the writing, direction and acting — but because it’s a show created for people like me.

What factors go into a show like this?  Here’s a potentially incomplete breakdown:

By this I’m not referring to the principal cast of the series beyond Oscar winner Timothy Hutton, though black-belt television fans will recognize Gina Bellman as ditzy Jane from the iconic British sitcom "Coupling," Christian Kane as an occasional supporting player on "Angel" and Aldis Hodge as Voodoo from the first season of "Friday Night Lights."

I’m instead referring to a guest-cast history that includes a number of well-known alumni from various nerd franchises.

Just a small sampling from the past two seasons: Wil Wheaton and Brent Spiner ("Star Trek: The Next Generation"), Armin Shimerman ("Star Trek: Deep Space Nine," "Buffy"), Danny Strong ("Buffy"), Mark Sheppard ("Firefly," "Battlestar Galactica," "Dollhouse," "24"), Sam Anderson ("Lost," "Angel"), new recurring guest star Jeri Ryan ("Star Trek: Voyager")…  What this kind of legacy indicates is that the show in question knows who it’s trying to appeal to — and is happy to give them what they want.

References to other media

Anyone who has spent any extended time hanging out with TV fans knows that the conversation more often than not will devolve into references and quotes from various shows, often with a great deal of speed and lack of citation.

What often results from the casual trading of in-jokes is a sense of community, built from this shared knowledge; sharing a joke over Tom Baker or the even-numbered "Star Trek" films or tauntauns with even a complete stranger creates a bond that shows like "Leverage" can use to engage their fan base.

Done well — which is to say, subtlely enough to not trip up unaware audiences, but without being painfully overexplained so as to annoy those who do get the reference — a throwaway line like "The CIA computer guys call him the Kobayashi Maru" can serve as a wink from the creators to the audience, a "we’re just like you" moment that serves to draw in an audience that, at least if you believe the stereotype, is used to feeling alienated. For the key to creating a nerd-friendly show, it’s worth stating flat-out, is being a nerd yourself.

On "Leverage," the primary source of these sorts of references comes via the hacker Hardison (Hodge), who’s seen in flashbacks wielding a lightsaber and complains about his torrent of "Doctor Who" running slowly. "Age of the geek, baby!" is something he’s prone to exclaiming often.

However, Hardison dresses fashionably, has an ongoing flirtation with the attractive yet emotionally stilted Parker (Beth Riesgraf) and is capable of social interaction. (He’s also black, which is a nice bit of diversity.) Other characters might mock his nerdy background, but he’s far from a stereotype — of any sort. Instead, he’s a likable character it’s not hard to imagine audiences wanting to emulate.

Building on that idea, "Leverage" has a keen sense of its own timeline and history, and makes frequent references to previous episodes, from a throwaway line like Nate’s (Hutton) complaint in the second-season premiere that during the previous year (i.e., the first season), "I was pretty much drunk that whole time" to Eliot (Kane) regularly quietly identifying an obscure fighting style or weapon with a modest "It’s a very distinctive [blank]."

Such references encourage the fans to become as invested in the show as its writers are, because the level of jokes and callbacks is a clear indication that everyone involved loves the series in question.

Plenty of other series share similar features. "How I Met Your Mother," for example, is often extremely consistent with its internal logic, has a great deal of fun with its casting and will call back jokes from many seasons past. And "Castle," starring Nathan Fillion, has never shied away from referencing Fillion’s previous star-making role as Captain Mal Reynolds on fan favorite "Firefly."

It’s truly a rising trend in the television world, and hopefully one we’ll continue to see in the future. "Age of the geek, baby!" indeed.