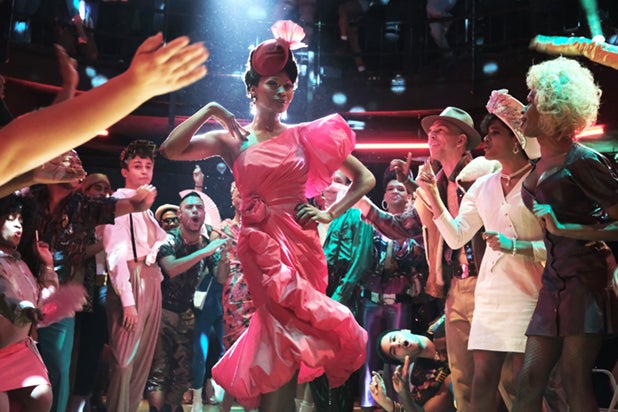 For the first time, there are more LGBTQ characters of color on broadcast TV than white ones, according to GLAAD’s annual “Where We Are on TV” report released Thursday.

Characters of color made up 50 percent of all onscreen LGBTQ roles, with white characters making up 49 percent. There was a record high percentage of black characters at 22 percent (up from 18 percent last year). Latinx characters remained at last year’s 8 percent, and API series regular characters was up one percent from last year, from eight percent to seven percent.

Across all platforms, including broadcast, cable and streaming services, the total number of bisexual+ people is up to 117 from 93, transgender people is up to 26 from 17 and HIV-positive characters are up from two to seven.

The rising representation on screen is important to society’s acceptance and understanding of those belonging to the LGBTQ community, GLAAD President and CEO Sarah Kate Ellis said in a press release Thursday.

“With anti-LGBTQ policies being debated here and abroad, the stories and characters on television are more critical than ever before to build understanding and acceptance of LGBTQ people,” Ellis said. GLAAD’s report comes the same week that the Trump administration considers redefining gender as a biological condition determined at birth under Title IX.

“Not only do stories that explore the rich lives and identities of LGBTQ people move the needle forward culturally, but they pay off in ratings – shows like ‘Will & Grace,’ ‘Supergirl,’ ‘Empire,’ and ‘How To Get Away with Murder’ all attract millions of viewers weekly and demonstrate that audiences are hungry for new stories and perspectives,” Ellis continued.

“This year’s ‘Where We Are on TV’ report has shown important progress towards a media landscape that is LGBTQ-inclusive and portrays the community in a fair and accurate way,” Townsend said in the press release.

“This year we noted two history-making television moments: the premiere of FX’s ‘Pose,’ which features the largest number of transgender series regular characters on a scripted U.S. series ever, and this fall The CW’s ‘Supergirl’ introduced audiences to TV’s first transgender superhero when Nicole Maines made her debut as Dreamer/Nia Nal,” Townsend continued. “This is all part of a welcome increase in television telling groundbreaking stories featuring characters whose identities have long been left off screen.”