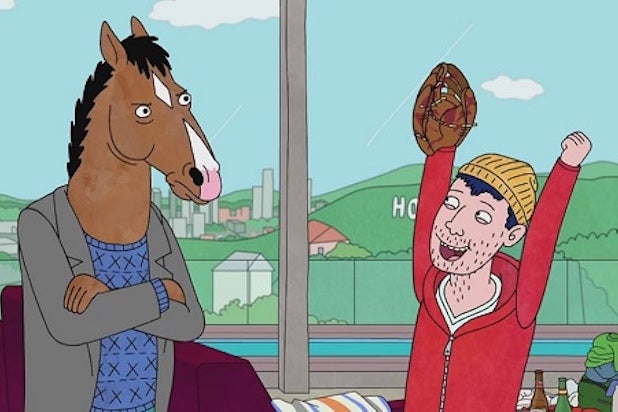 The number of LGBTQ characters found in scripted programs on TV hit a record high this season, according to GLAAD’s 22nd annual “Where We Are on TV report.” However, there is still work to be done, as those characters are still primarily white men.

According to GLAAD, 58 (6.4 percent) of the 901 regular characters expected to appear on broadcast television for the 2017-2018 season were identified as gay, lesbian, bisexual, transgender, and/or queer. This marks the highest percentage of LGBTQ regulars on broadcast television since GLAAD began tracking the numbers. However, in all forms of television, GLAAD found LGBTQ characters are still predominantly white, men, and cisgender.

GLAAD noted this year’s report comes when acceptance for the LGBTQ is declining and amid moves made by President Trump’s administration to limit the rights of the community.

“As LGBTQ acceptance in government and the broader American culture reverses course, television is a critical home for LGBTQ stories and representation matters more than ever,” said Sarah Kate Ellis, President and CEO of GLAAD, in a press release. “At a time when the Trump administration is trying to render LGBTQ people invisible, representing LGBTQ people in all of our diversity in scripted TV programs is an essential counterbalance that gives LGBTQ people stories to relate to and moves the broader public to support LGBTQ people and families.”

GLAAD was able to count non-binary and asexual characters for first time this year, with broadcast being the only platform without a canon asexual character. Cable and streaming each counted one character as asexual, Raphael on Freeform’s “Shadowhunters” and Todd on Netflix’s “BoJack Horseman.”

“Numbers are only a small part of the story when it comes to LGBTQ representation on TV and simply being present onscreen is not enough,” said Megan Townsend, Director of Entertainment Research & Analysis at GLAAD. “While we’re pleased to see numbers on the rise, consideration of how LGBTQ characters are woven into storylines and whose stories are making it to screen is crucial for judging progress of the industry. And there is still work to be done.”

Additional findings from the report include: