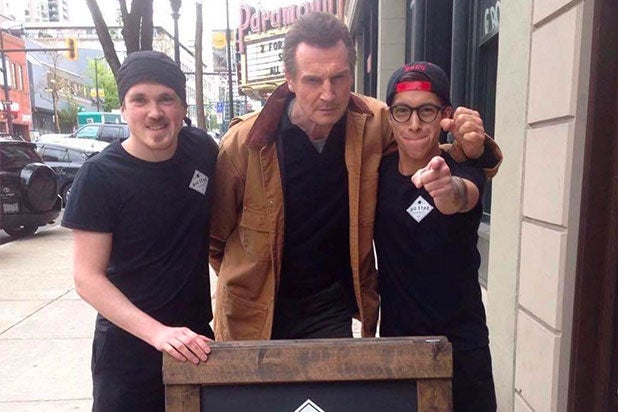 Liam Neeson likes free food as much as the next person apparently, because when a restaurant in Canada advertised that the actor eats there for free — well, he decided to take them up on it.

The “Taken” star stopped by the Big Star Sandwich Co. in Vancouver earlier this week after employees put up a sign that read, “Liam Neeson eats here for free.” When he actually showed up, employees wasted no time in taking a picture with the action star.

In an interview with the Huffington Post, Big Star manager Matt Prium said that he had heard Neeson would be in the neighborhood filming his new thriller, “Hard Powder.” Given that there was a chance he might walk by, he wrote the message on the chalk board outside the restaurant, offering Neeson free food.

On the other side of the sign, Prium wrote, “Come in and get taken away by our sandwiches.”

Alex Johrden, director of operations for Big Star, said the sign was put up at 11 a.m. and Neeson showed up seven hours later asking, “Where’s my free sandwich?” However, he was in a hurry and couldn’t actually enjoy the meal.

In honor of the visit, Big Star created a signature sandwich called “The Neeson.”