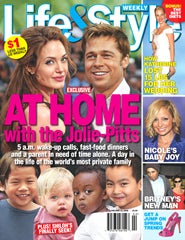 Life & Style weekly laid off eight people on Friday, or about 10 percent of its staff, TheWrap has learned.

The layoffs are part of a shifting of resources within the title — with the idea of putting a bigger emphasis on breaking celebrity news.

“As the magazine continues to grow, we are focusing our attention on breaking the biggest celebrity news and forecasting the trends now more than ever,” a spokesperson for the magazine said. “We have made small changes to our staff and are restructuring some departments as a result.”

There were no layoffs at In Touch, Life & Style’s sister title under the Bauer Publishing umbrella.

Despite the industry’s prolonged advertising doldrums, Life & Style has actually been doing pretty well. Through March, ad pages are up 10.2 percent (to 93.04) at the magazine, according to the Publishers Information Bureau. (Compare that to the average 9.4 percent slide for the rest of the industry.)

Life & Style’s estimated ad revenue – a less reliable metric, given the frequent discounts publishers give frequent advertisers – was up 27.5 percent during the first three months of the year.

Ad pages at In Touch were flat for the quarter.