Lifetime has cast its new Prince Harry and Meghan Markle for the third entry in the “Harry & Meghan” movie series, the cable channel announced Wednesday.

Jordan Dean (“The Punisher”) and Sydney Morton (“She’s Gotta Have It”) will take on the royal roles for the upcoming “Harry & Meghan: Escaping the Palace.” They follow Murray Fraser and Parisa Fitz-Henry from 2018’s “Harry & Meghan: A Royal Romance” and Charlie Field and Tiffany Smith from 2019’s “Harry & Meghan: Becoming Royal.” 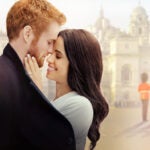 Per Lifetime, “Escaping the Palace” explores “what really happened inside the palace that drove Harry and Meghan to leave everything behind in order to make a future for themselves and their son Archie.”

Directed by Menhaj Huda and written by Scarlett Lacey, the movie will “detail Meghan’s growing isolation and sadness, their disappointment that ‘The Firm’ was not defending them against the press’ attacks and Harry’s fear that history would repeat itself and he would not be able to protect his wife and son from the same forces that may have contributed to his mother’s untimely death.”

Merideth Finn and Michele Weiss are executive producers on the project.