What’s a romantic holiday TV movie without a big kiss, whether it’s under the mistletoe, in the snow or by the fire? Not as merry, that’s for sure. That’s why Lifetime began to troubleshoot the actors-kissing-during-a-pandemic conundrum it was facing while shooting its annual slate of small-screen Christmas films, which total 30 projects this year.

“Everybody was incredibly concerned about, as we were figuring it out, making sure that we were following the best possible guidelines to keep people safe,” Amy Winter, head of programming at Lifetime, told TheWrap. “We all sat down, even before we got started, saying, how is anybody even going to kiss in these movies, given the circumstances? And the greatest, oddest solution I’ve seen so far is people kissing through plexiglass that can be removed in post, which is absolutely phenomenal.”

In the photo above, you can see the two stars smooching with the plexiglass between them, which Lifetime says will be removed in post and no longer visible when the movie premieres Dec. 6 at 8/7c.

Stroker, who previously appeared on “Glee,” plays a popular romance novelist who’s suffering from a severe case of writer’s block when she arrives at her favorite snowy bed & breakfast for Christmas.

There, she meets the B&B’s new owner (Daniel di Tomasso), who bears an uncanny resemblance to the handsome hero from her novels and gets her new manuscript back on track.

“Christmas Ever After” is produced by Neshama Entertainment in Association with Marvista Entertainment and executive produced by Arnie Zipursky, Suzanne Berger, Julianna Hays, Larry Grimaldi, Hannah Pillemer and Fernando Szew. Pat Kiely directs from a script by Katrina Mathewson and Tanner Bean.

The cast and crew wore PPE on set, which you can see Stroker sporting in the photo below, courtesy of Lifetime. 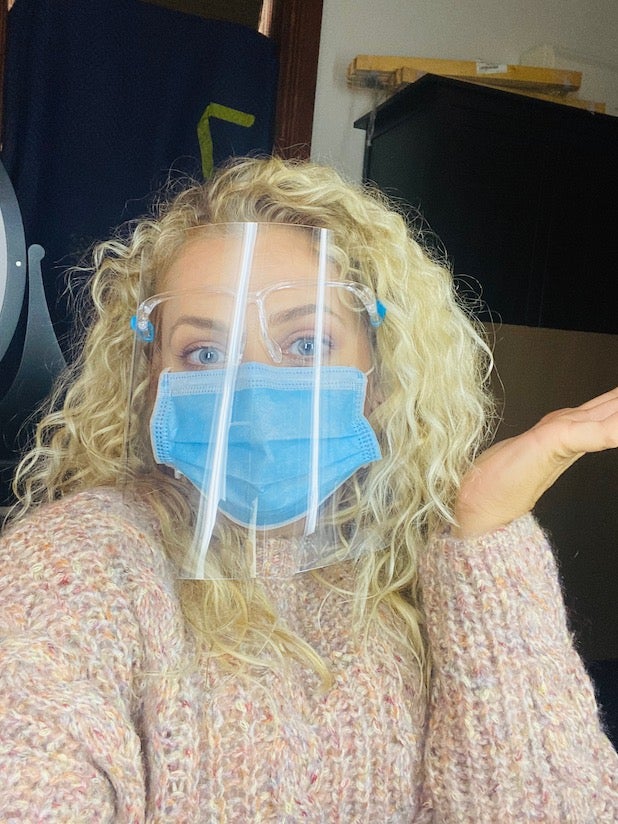