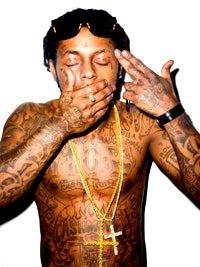 Lil Wayne — whose one-year incarceration in New York’s Rikers Island prison was delayed so he could undergo eight root canals in one day — has joined Twitter.

The 27-year-old rapper, born Dwayne Michael Carter Jr., joined Twitter on Sunday – just eight days before he is due to start serving time after pleading guilty to weapons charges stemming from a 2007 arrest. He already has 129,000 followers. (Fun fact: Of the 13 people Lil Wayne is following, two have “lil” in their handles.)

The Grammy Award-winning Wayne performed at the Grammys earlier this month.

His sentence is expected to begin Tuesday.