Former NFL quarterback Peyton Manning shared his deep, deep, deep love of Lily Collins’ Netflix series “Emily in Paris” during Weekend Update on this past Saturday’s episode of “Saturday Night Live,” and the actress focused in on one particular part of the sketch as she shared her reaction on Sunday.

“Peyton Manning in a beret is everything I didn’t know I needed,” Collins wrote on Instagram, referring to a moment in the gushy three-plus minute sketch where the former Colts and Broncos quarterback popped on a red beret just like the one worn by Collins’ character in her show. 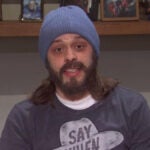 In the Weekend Update bit, while Manning was brought on to discuss football, including the Kansas City Chiefs/Buffalo Bills’ nail-biter a week ago, he kept turning the discussion back to “Emily in Paris,” which he said he binged after starting it during the hour he had to kill before the first matchup.

Netflix didn’t immediately respond to a request for comment from TheWrap over the weekend about the “SNL” sketch.