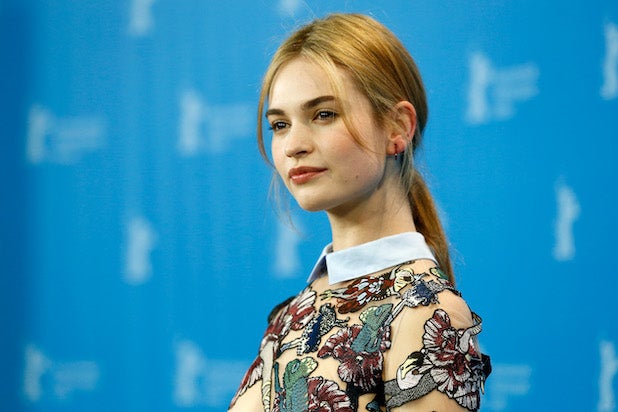 “Baby Driver” and “Yesterday” star Lily James is set to star in the next film from director Phillip Noyce called “Peggy Jo,” a true-crime story that’s a “Bonnie and Clyde” style thriller, but with no Clyde.

James will play Peggy Jo Tallas, a real-life Texan who takes to robbing banks while posing as a man. The story is loosely based on the true story account and was adapted for the screen by “Appaloosa” writer Robert Knott.

The film will be shot on location in the southern U.S.

Noyce’s movie is described as a playful take on the films of the ’70s and ’80s and will specifically be filled with references to George Roy Hill’s “Butch Cassidy and the Sundance Kid,” a film that the character Peggy Jo Tallas grew up admiring and inspired her to assume her famous alter-ego “Cowboy Bob” and begin robbing banks. As she’s pursued by an FBI agent, she also falls in love with another damaged soul named Charlie who is similarly enchanted with adventurous stories, books and poetry. The full synopsis for the film is below.

“Peggy Jo” is produced by Simon Brooks through his Los Angeles-based production entity Canyon Creek Films. HanWay Films has picked up international sales rights and will introduce the project to the buyers at the upcoming Cannes Virtual Market. UTA Independent Film Group is handling the U.S. sale.

“I have been looking to make a movie with Phillip Noyce for years and ‘Peggy Jo’ is finally the one. It is a great emotive and thrilling story that will capture audiences worldwide,” Brooks said in a statement.

“‘Peggy Jo’ is all about wanting more than your life presents to you and celebrates with a wink and a nod, many of our favourite films from the 70s through to the 80s, in tone, fun, music, colour and pure escapist entertainment, with a whole load of heart,” HanWay Films MD Gabrielle Stewart said in a statement.

Peggy Jo (James) is a unique beautiful person, prone to be romantically lost in books and films; however she is not the sort of person who lets life and people get the better of her. When her latest beau turns out to be married to his bank co-worker, she takes matters into her own hands, robbing his very bank disguised as a man with a big beard and a back-to-front cowboy hat. But it’s just too easy! Inspired by her love of stories such as “Butch Cassidy and the Sundance Kid,” and eager to support her struggling family financially, Peggy Jo starts holding up a string of banks as her now famous alter-ego “Cowboy Bob”. She becomes more and more daring, hotly pursued by astute FBI agent Bishop. But along the way she loses her heart to damaged soul Charlie. Like Peggy, Charlie also seeks escape and solace in the fantasy world of books and poetry. As Bishop draws nearer and her love-story with Charlie is threatened, Peggy chooses, like her heroes, not to give up, but to go down in a blaze of glory. According to the FBI, the beautiful and rambunctious Peggy Jo Tallas was one of the most unusual bank robbers of her generation, always alone, without a partner to drive her getaway car and determined not to carry a weapon into any bank she robbed. Peggy Jo will be a playful take on her thrilling life and a celebration to the films from the 70s and 80’s filled with references to George Roy Hill’s Academy Award winner “Butch Cassidy and the Sundance Kid.”

Robert Redford's 15 Most Memorable Movies, From 'Butch Cassidy' to 'All Is Lost'

Robert Redford announced he was retiring from acting -- but still had a brief cameo in 2019's "Avengers: Endgame." TheWrap honors the great actor by looking back at 15 of his most memorable movies as both actor and director.

Redford has played just about every character, from a Western outlaw to a talented American skier.