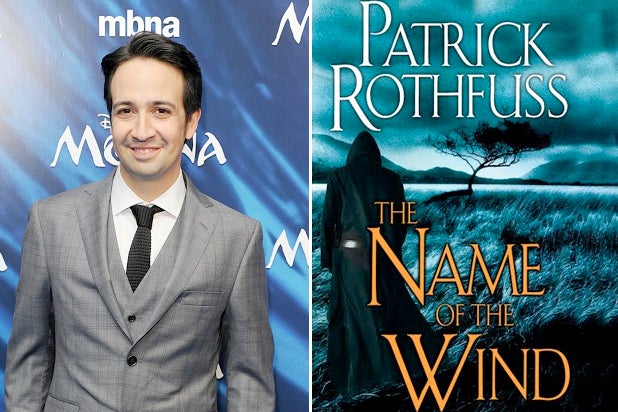 Many fans’ dreams came true when Lionsgate announced Tuesday that “Hamilton” creator Lin-Manuel Miranda would be a creative producer and “musical mastermind” to help the studio develop and produce an adaptation of Patrick Rothfuss’ “Kingkiller Chronicle” fantasy trilogy.

The biggest fan of Rothfuss’ work may have just been Miranda himself, who has never been shy about his love for the books and author on social media.

The studio is mounting a feature film and accompanying TV series adaptation of the fantasy series, which follows musician Kvothe and his own three-day autobiographical account of his adventures.

Miranda will compose original music for the project, as well as writing songs and maybe even develop a stage version one day.

Here’s a few things to know about your next favorite franchise.

1. This collaboration may have been born on Twitter
The Miranda-Rothfuss mutual admiration society is an ongoing, public thing, with Miranda frequently tweeting at Rothfuss or just tweeting quotes from the books, and in 2015, he proposed working together, informally.

“Patrick, if you’re interested in adapting your masterpiece, call me first. Huge admirer of your writing,” he said after a fan suggested the idea.

“If I have any say in the adaptation….” Rothfuss answered.

2. There’s some “Kingkiller” in “Hamilton”
Miranda was not lying when he professed to be a Rothfuss fanboy. In fact, that a pivotal scene from the first book in the series, “The Name of the Wind,” inspired one of “Hamilton’s” songs.

In April, Miranda revealed that “The Story of Tonight” featuring Hamilton and his fellow idealistic and buzzed friends singing about the coming revolution, “is me trying to capture the feel of Kvothe & his friends leaving the Eaolian.”

3. Casting is going to be a hot topic
Rothfuss himself has some thoughts on who should play various characters in the movie, such as Natalie Portman (circa 2007) as the female lead, Denna. As for the lead character Kvothe, he’s less sure.

“Kvothe is … tricky. I don’t think I’d like a star in the role. I don’t want Brad Pitt as Kvothe,” the author said in 2007. “I just want Kvothe as himself. To that purpose, I think I’d need to get a no-name actor with some serious acting chops to play the male lead.”

4. Get ready for lutes to become cool
Music is central to the world of “Kingkiller,” and lead character Kvothe plays the lute. Miranda is already thinking about how to compose new music for the instrument.

“*stares at a lute for 20 minutes, sweats profusely* Okay, so we’re doing this,” he tweeted shortly after the news broke.

5. The story is not over
“The Kingkiller Chronicle” is intended to be a trilogy. But though it’s been five years since the second book, “The Wise Man’s Fear,” was released in 2011, there is still no release date for Book 3, working under the title “The Doors of Stone.”