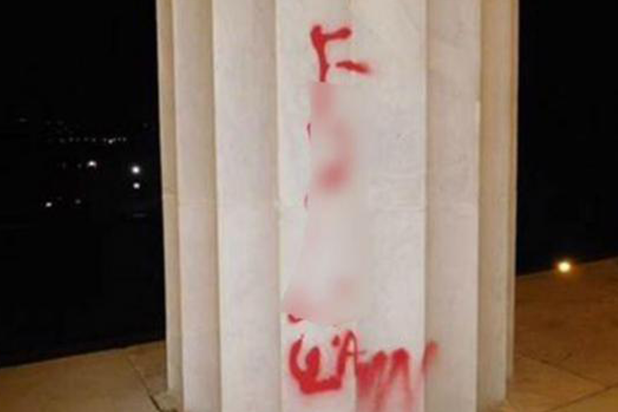 The Lincoln Memorial has been vandalized with graffiti and the National Park Service is on the case.

It’s not exactly clear what the graffiti says, however. From an image released by the NPS, some could interpret the red spray paint as saying “F— law,” but some are saying it reads “F— Islam.”

The words were found around 4:30 a.m. Tuesday morning on a pillar at the monument that overlooks the Capitol building and the National Mall, said NPS to D.C. station NBC 4 News.

The park service is still investigating, but cleanup is already underway. The preservation crew will apply a “mild, gel-type architectural paint stripper” in order to remove the red spray paint without harming the stone underneath.

Additional graffiti in silver spray paint was found on the 1400 block of Constitution Avenue, though any words were indecipherable, according to NBC’s report.

This vandalism comes after violent white supremacist rallies in Charlottesville, Virginia, over the weekend. A man who was part of the rallies drove his car into a crowd of counter-protesters, killing Heather Heyer, 32, and injuring 19 others.

Unrest has continued across the country after the white supremacist rallies. Protesters toppled a Confederate statue in Durham, N.C., on Monday night, and a suspect was arrested in Boston accused of vandalizing the city’s Holocaust memorial.

On social media, finger pointing is flying every which way. Some are blaming left wing extremists, while others blame alt-right racists. One observer urged people to reserve judgement until more information is found: “Let’s find the vandals and their intentions before pointing fingers.”

Anyone with information on the Lincoln Memorial vandalism is encouraged to call the Park Police non-emergency line at 202-610-7505.

From the once party of Lincoln and now party of white supremacy, "F*CK ISLAM," spray-painted today on the Lincoln Memorial pic.twitter.com/WGVrX6fgPk

Let's find the vandals and their intentions before pointing fingers. Lincoln Memorial.

It's taking a long time for Democrat leaders to condemn this hateful act. pic.twitter.com/yzcw63FWuC