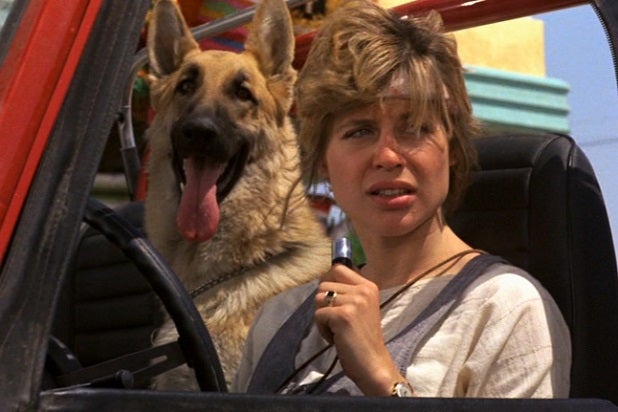 The “Terminator” series may about to get even more confusing, which is quite a feat considering the last movie in the franchise completely rewrote the twisting time-travel story from the ground up.

Linda Hamilton is set to return to the series, along with its original creator, Director James Cameron, and the original killer robot, Arnold Schwarzenegger. Hamilton starred in the first two films in the series as Sarah Connor, the mother of John Connor, the man who, in the future, would lead the human resistance against the evil sentient computer program known as Skynet.

In the original “Terminator” film, Schwarzenegger’s Terminator traveled back in time from the future to kill Sarah (Hamilton), in order to prevent John’s birth. The assassination failed, thanks to Kyle Reese (Michael Biehn), a human soldier John Connor had sent back from the future to protect Sarah.

Hamilton also starred in “Terminator 2: Judgment Day,” when the machines made a second attempt on John’s life, this time when he was 10 years old. In Cameron’s original two films, Sarah, John, and a reprogrammed Arnold-bot buddy (this time reprogrammed by the Resistance and sent back as a protector) seemingly stopped the rise of the machines by destroying the company responsible for creating Skynet. They’d apparently stopped Judgment Day, the day Skynet became self-aware and launched the world’s arsenal of nuclear missiles to wipe out most of humanity.

But because there had to be more “Terminator” films, the story continued, and eventually got all kinds of confusing with its time-travele logic. And now that Hamilton’s coming back with Cameron, it seems set to get even more bonkers — because at the very least, this new “Terminator” film will disregard some key events from “Terminator 3” in its new, “Terminator: Genisys”-rebooted timeline.

Also Read: 14 Time Travel TV Shows You Should Be Watching Right Now, From '12 Monkeys' to 'Time After Time' (Photos)

Hamilton’s return to the franchise suggests the series will likely be doing away with that inconvenient bout with cancer in “Terminator 3” in order to bring Sarah back. That seems a fairly easy retcon, since “Terminator: Genisys,” the latest film in the franchise, essentially scrapped the “Terminator” timeline.

But the new circumstances set up by that movie, coupled with the ages of both Hamilton (who is 60) and Schwarzenegger (who is 70), raises the question of when this new “Terminator” might be set, and where it’ll fall in among the (somewhat) established events of the story.

Sit tight, because everything’s about to get weird.

So in “Terminator: Genisys,” the entire “Terminator” timeline was rewritten through time travel, effectively eliminating all the movies that came before it. In that timeline, instead of first finding out about Skynet and the future war with the robots in 1984 during “The Terminator,” Sarah encounters the robots when she’s a child. An Arnold-bot she dubs “Pops” shows up when Sarah is 9, possibly murders her parents, and takes her into its care. The plan is to prepare for future Skynet attacks, including the first one in 1984.

Parts of the timeline of the original “Terminator” still exist. In 2029, as in the first movie, John Connor sends Resistance soldier Kyle Reese (now played by Jai Courtney in the role originally held by Michael Biehn) back to save Sarah from the first Terminator robot. But Pops and Sarah (now played by Emilia Clarke) know what’s going to happen and have been prepping for the pair’s arrival. They dispatch the first Terminator easily and save Reese — Sarah’s former savior — from a tougher T-1000 model. Already, all the events of the original movie have been rewritten.

Sarah and Pops have also been building a time machine up to this point, which required components from the original Terminator robot to complete. They plan to pop forward in time to 1997 to stop Skynet, but Kyle receives a vision thanks to the altered timeline that convinces him that Skynet now becomes self-aware in 2017. So they travel forward to 2017 instead.

“Terminator 2: Judgment Day,” “Terminator 3: Rise of the Machines,” and “Terminator: Salvation” (which took place in 2018, after Judgment Day and during the war against Skynet) are all out the window at this point. None of the events in those movies happen because time travel has moved everyone around, and now none of the dates match up (Judgment Day was originally 1997, then 2004, and in “Genisys,” it still hasn’t happened by 2017). At the end of “Genisys,” the team manages to stop Skynet (now a computer and smartphone operating system instead of a military computer or an Internet-corrupting virus as in the other movies). Skynet’s computer cores survive, but there’s still no Judgment Day.

Other key elements to the “Terminator” story get adjusted in “Genisys” as well. The original story was about how Sarah was marked for death from the future because she was the mother of legendary resistance leader, but Kyle Reese wound up being his father — Skynet sending a robot back in time was essentially responsible for creating its future downfall.

But in “Genisys,” Reese and Sarah don’t fall in love and have their action movie tryst in the middle of the movie. John Connor, at this point, doesn’t exist.

All that might be confusing to follow, but hopping around in time and rewriting the events of “Terminator” makes it unclear when the new film might take place, although there’s now a lot of leeway.

A big part of “Genisys” is how it upends the traditional “Terminator” story by turning Future John Connor (Jason Clarke) into a Terminator himself, sending him back to kill his own mom. By the end of the movie, the characters have basically rejected the idea of fate and following the old timeline’s requirements. It’s a return to Cameron’s thematic concept for “Terminator 2,” which hinged on the line, “No fate but what we make.”

But there have to be a few constants, even if some of the old ones, like the importance of John Connor, have been eliminated. There still has to be a machine war, right? Judgment Day still has to occur. Otherwise, where do all these killer robots keep coming from?

Hamilton’s age alone suggests that a follow-up to “Genisys” is ignoring her cancer diagnosis, and the fact that the movie moved Sarah Connor more than 30 years into the future means that an older Sarah could pop up from just about any point in the new timeline’s future. But will Hamilton be a Sarah who survives into the machine war — something that never happened in any of the other films, including Cameron’s original? When exactly does that war take place now, since Judgment Day has been postponed more than 20 years?

The good news is that, as Cameron said in an interview with Yahoo!, “Genisys” “reinvigorated” the franchise basically by retconning out all its previous requirements. The franchise was somewhat bogged down by all the things it had placed in its own future. Now, none of those things exist.

Except, that is, for Sarah Connor, and time travel weirdness. Hamilton’s return to the franchise is an exciting one, but it raises an important point: To borrow a line from Emilia Clarke’s famous HBO show, we know nothing about “Terminator.”