Lindsay Lohan’s career is careening toward a dead end faster than she can race Herbie to the finish line.

Her recent dismissal as not "bankable" from the movie project "The Other Side," starring Woody Harrelson and Anjelica Huston, is only one reason Lohan is no longer a box office attraction.

Her frequent appearances on tabloid covers drunk, jailed or slumped in a car wasted after an accident are images hard to erase from memory — unless they’re replaced with better ones.

Improving themselves after bad press is what most troubled actors usually do to salvage any potential moneymaking ability they have to attract their fans and therefore steady work in Hollywood.

Oddly, some of the worst conduct we’ve witnessed lately hasn’t been from young starlets as much as from woefully depraved adults like Tiger Woods or intemperate ones like Charlie Sheen. Network executives and fans are more than willing to forgive their favorite athletes or TV stars in order to see them back on track and gainfully employed — making money for everyone in their respective industries. 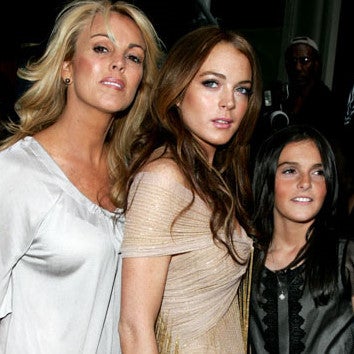 Rehab followed bya steady path of wholesome behavior (by Hollywood standards) seems to be the key to regaining the viewing and paying public’s trust in misguided celebs overindulging in their own fame.

In Lohan’s case, rehabilitation from drug use and the party scene hasn’t been enough to inculcate better standards for herself to live by.

Some say her obnoxious behavior can be blamed on her background.

"Look where she comes from," tweeted @geenathelatina, a local DJ and Hollywood observer, about Lindsay’s notorious reappearance in the gossip mill.

Remorseful apologies followed by corresponding stints in rehab and first-class demeanor — in Sheen’s case, it may take a couple more tries — is apparently all that’s needed to be back in fans’ good graces.

Lohan has yet to do this.

Going in and out of clinics, being associated with thievery and endless revelry have served to highlight her reckless behavior under the bright Hollywood spotlights — but it’s not the kind of illumination directors and producers like to count on to blaze the path to the bank.

The Lohan family should consider moving away from Hollywood.

Counting on their almost-not-famous-daughter’s career to make them money is not working to Lilo’s advantage. Witnessing her fame-seeking father pulling stunts like he did last week — calling the police to raid his own daughter’s home, claiming he’s now concerned about his younger daughter currently residing with Lindsay — is doing too little too late and hypocritical in my view.

If the adult Lohans want to keep their daughters on a healthy path to celebrity success, simply take a break; don’t hit the night spots, don’t drag your minor daughter into it.

Get involved in an altruistic service organization or use what you have left of your celebrity to wholeheartedly and genuinely support a cause for longer than it takes to make a milkshake.

Otherwise, stay home or go on an extended vacation. Give us all a break.

Both Lohan parents should be less lenient with Lindsay — if that’s at all possible now — and certainly take Ali out of this bad picture lest she gets swallowed, chewed up and spit out by the same devastating environment that’s doing Lindsay in.

Parents, it’s not too late: Grab the reins and lead by example.

And. As much as I hate what I’m about to say, perhaps take a cue from Britney Spears’ parents, seizing control of your child’s life to rectify her path, which seems to be working for them so far. Of course, there are better examples to be found, but this is one high-profile (very nearly) success story everyone is aware of.

Appearing in "Clean House" and exposing your already messy life even more is not helping you out. You and your family should close ranks and take a long, much-needed breather from LaLa land’s suffocating grip so you can make a fresh return.

After all, those classic family movies you made earlier — "The Parent Trap," "Freaky Friday," "Confessions of a Drama Queen" — still hold a special place with families and kids who watch them with glee.

Get your act together before you have nothing more to offer.

Suzette Valle was recognized by Time Warner Cable as one of San Diego's Best Moms. She is the author of "101 Movies to See Before You Grow Up" (Walter FosterJr. Fall 2015), a reference book for kids. She has appeared on the "Dr. Phil" show discussing the effects of reality shows on families. Her posts have been featured on Fox,YahooMovies.com, and Movies.MSN.com. A mother of two, she lives in San Diego with her husband. She blogs about parenting and Hollywood's influence on children's daily lives and family values at www.MamarazziKnowsBest.com. Follow her on Twitter: @SuzetteValle.
x
Looks like you're enjoying reading