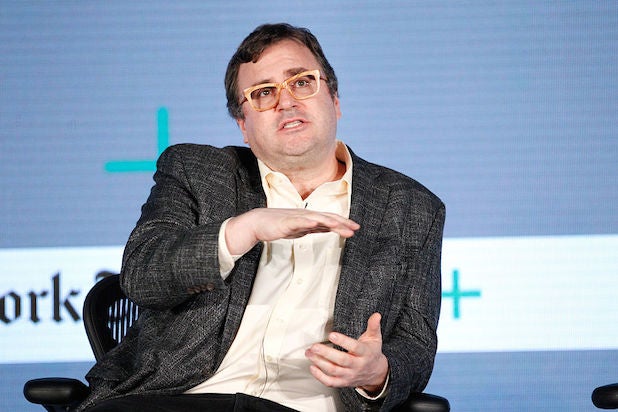 So, you’ve got the next hot app ready to “disrupt” the tech industry? Before diving head first into your business, you might want to heed the advice of LinkedIn co-founder Reid Hoffman.

Hoffman is one of the most prominent and affluent venture capitalists in Silicon Valley, with dozens of investments, including in Airbnb, Groupon, and Funny or Die. He also knows firsthand what it’s like to grow a successful startup: He launched professional networking site LinkedIn in 2002, which now has more than 6,000 employees. It also made him extremely rich: As executive chairman, Hoffman netted a cool $2.8 billion when Microsoft bought out LinkedIn last year.

Now, Hoffman is sharing his expertise and picking the brains of the biggest tech gurus on his “Master of Scale” podcast. In the latest episode of his self-titled podcast, Tim Ferriss went through and cherry picked the 10 startup commandments all budding entrepreneurs should learn from Hoffman.

TheWrap has them covered for you below.

Prepare to hear “no” a lot as you pitch. Hoffman doesn’t see rejection as a telltale sign an idea is destined to fail, though. “The best ideas often appear laughable at first glance,” said Hoffman.

He pointed to Google Search being seen as a laughable business move at first — it pulled users away from its site, and at the time ad revenue was based on time-on-site. Now, Google dominates the online ad revenue game.

On his podcast, Hoffman talked to Katheryn Minshew, founder of career advise and networking site The Muse. Before pulling in $16 million in funding, Minshew said she was rejected 148 times, to the point where it became part of her daily routine. Minshew understood to get her company off the ground, she’d have to fight through the chorus of “nos.”

But how can you tell if you’re right or the decliners are right?

“You have to pay attention to the quality, not the quantity of rejection,” said Hoffman. Keep your eye on if they show a faint “squirm” in their rejection — if major investors seem unsure they made the correct call, you’re probably heading in the right direction.

2. Hire like your life depends on it, because it does

Building a strong workforce is essential to any thriving startup. Eric Schmidt, former CEO of Google, told Hoffman he was focused on finding “interesting” people when they bring people onboard. And the two facets he looks for in these employees are persistence and curiosity.

As Schmidt put it, “persistence is the single biggest predictor of future success.”

If you find these traits in your employees, you’re off to a good start.

3. In order to scale, you have to do things that don’t scale

This means getting to know your business and its customers, down to the nuts and bolts.

Brian Chesky, CEO of Airbnb, told Hoffman he did something radical when his company first started. Most of his customers were in New York, but the company was based in Northern California. To better understand what his users wanted, he went door-to-door in New York, meeting customers and hearing their input on how to make the service better. It’s where they came up with the idea for professional photographs to make rentals look more appealing.

This isn’t a move Chesky could pull now, but as the company was in its nascent stages, it helped them set the path forward.

This is for two reasons: To be ready for unexpected expenses, as well as unexpected opportunities.

“Take the money whenever and wherever you can get it, you never know when it’ll dry up,” said Hoffman.

This is one of the more famous Silicon Valley axioms. Launching a startup is akin to “throwing yourself off a cliff and assembling an airplane on the way down,” as Hoffman puts it.

Founders need to realize there is no perfect product. You need to push your company into the market and get feedback, so you’re able to constantly refine your product.

This mindset was adopted by Facebook CEO Mark Zuckerberg early on.

“The strategy of Facebook is to learn as quickly as possible what our community wants us to do,” said Mark Zuckerberg. “That requires a culture that encourages people to try things, and test things, and fail.”

6. Every founder has to learn how to make decisions

Founders are faced with countless decisions as they build out there company, and they’re not going to bat 1.000. Ferriss, a prolific tech investor himself, put it succinctly: it’s better to make a wrong decision that’s correctable, than no decision at all.

7. Be prepared to make and break plans

Stubbornness can be a death sentence for entrepreneurs.

As new competitors and challenges emerge in your market, you have to be willing to pivot to keep your company moving forward.

8. Don’t tell your employees how to innovate

To lead an innovative tech company, founders need to foster an environment where workers can be creative. To Hoffman, this is even more important than the creativity of its founders. He points to Google’s embrace of “contained chaos” — where it used to give employees 20 percent of their time to think about new ideas.

Empower your workers to think outside the box, and you’ll be rewarded with ideas that move your company forward.

It sounds lame, but creating a positive company culture that your employees can rally behind is essential. Hoffman pointed to Netflix co-founder and CEO Reed Hastings as an exec that’s done an excellent job of this.

Hastings put in place a Netflix “Culture Deck,” outlining the company’s goals and how it envisions itself as a sports team, not a family. This was a critical point for Hastings. Employees understood its a collaborative environment, where they should work together to achieve goals. But Hastings wanted it to be clear “ultimately it’s about performance.”

Also Read: Apple iOS 11: How to Try Out Latest Operating System Ahead of Fall Launch

Giving its workers a clear message helped Netflix navigate from a DVD rental company to one of the preeminent online streaming services.

10. Have grit, and stick with your hero’s journey

This is the commandment that ties together all the rest. Entrepreneurs have to be willing to dig deep when the going gets tough.

“Grit is the sticktoitiveness that kicks in when you actually understand the risks, and understand you might die, but move ahead anyway,” said Hoffman. He even had a speech ready to go for these do-or-die moments. He’d tell his workers it’d be “super fucking hard” to get the company where it wants to go, but if they are able to push through, they’ll emerge as heroes.

Sounds a little dramatic, but that’s what it takes to lead a successful startup.

To listen to the full podcast on the 10 startup commandments, click here.