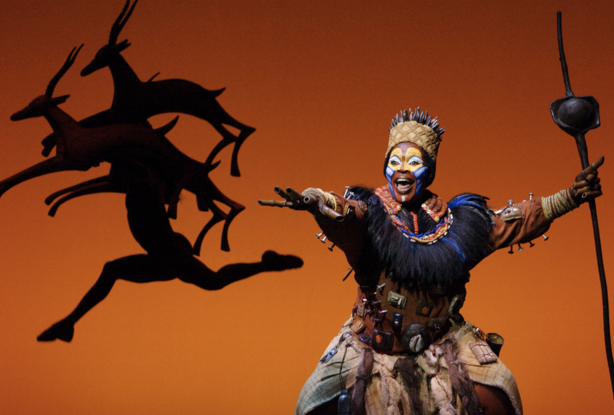 The folks at Disney Theatrical Group are humming “Hakunna Matata” this morning.

“The Lion King” is on the verge of achieving what even musical mega-hits like “Les Miserables” and “The Phantom of the Opera have yet to accomplish: becoming the first Broadway show in history to cross the $1 billion mark at the box office.

The show should hit that number either this week or next, a spokesman for the company said.

The Tony Award-winning show has been on Broadway for 16 years and has been hailed for its innovative use of puppets as stand-ins for animal characters and the stylish direction of Julie Taymor.

“This humbling milestone is a testament to the vision and artistry of Julie Taymor,” Thomas Schumacher, president and producer of Disney Theatrical Productions, said in a statement. “For nearly 17 years she has been ‘The Lion King”s guiding creative force and an inspiration to the show’s brilliant cast, musicians and crew. But above all, we thank our loving audiences who continue to be moved and delighted night after night at the Minskoff Theatre and all around the world.”

The selection of Taymor was a courageous one — she was best known at the time for her imaginative and off-beat staging of works by Shakespeare and Mozart — but “Lion King” earned critical plaudits and Tonys for Best Musical and Best Director.

Not all of her subsequent endeavors have been as fruitful. Taymor was fired from the Broadway show “Spider-Man: Turn Off the Dark” in 2011 over creative differences and cost overruns. Critics didn’t care for the final product much, either.

Last July, “The Lion King”s’ North American touring companies made $1 billion. The film adaptation of “The Lion King” has made more than $960 million worldwide.