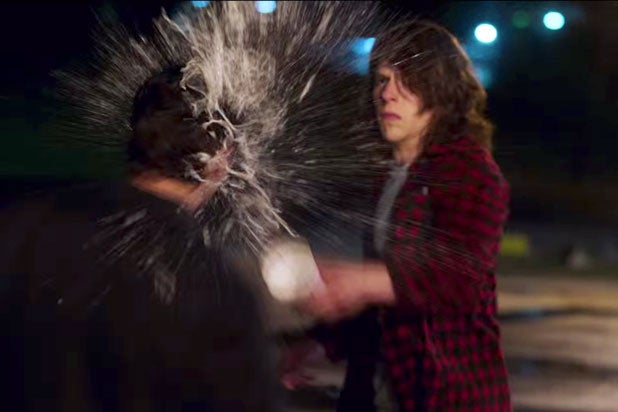 Investors socked Lionsgate stock Monday after the TV and film company reported a net loss of $42.1 million — down from a $20.8 million profit in the period last year — for the second fiscal quarter of 2016.

The box office flop of “American Ultra,” and marketing costs of “Last Witch Hunter,” which also under-performed, and “Sicario” drove the shortfall. “Witch Hunter” required a $7.2 million write down.

After falling more than 9 percent in initial post market trading the share price leveled off down roughly -7 percent at $35.50, down roughly -7  percent, after the studio reported revenues of $476.8 million, down 13,8 percent.

Analysts had projected revenues of $491 million. The loss of 28 cents per share, or 19 cents with adjustments, contrasts with expectations for a 3 cent profit.

“Although this quarter will be the lightest of the year due to timing and softer-than-anticipated performance of some of our recent film releases, our robust film and television pipelines position us for a very strong second half of the year,” CEO Jon Feltheimer said.

His confidence stems in large part from what looks like a very strong quarter ahead. “The Hunger Games: Mockingjay — Part 2,” the finale in the blockbuster franchise starring Jennifer Lawrence, opens on November 20. And revenues from “Sicario,” which has performed solidly at the box office, will be included.

Lionsgate put its money where its confidence was. The company increased its quarterly dividend by 9 cents a share, a 29 percent increase.

The down quarter was a team effort, with movie, TV and home entertainment all reporting losses.

TV revenues fell 13.7 percent to $59.9 million and TV production also plunged, dropping 20.7 percent to $122.8 million. The delivery of “Orange Is the New Black,” “Nashville” and “The Royals” will help those numbers next quarter.

Home entertainment revenues were down 6.6 percent to $153.5 million.