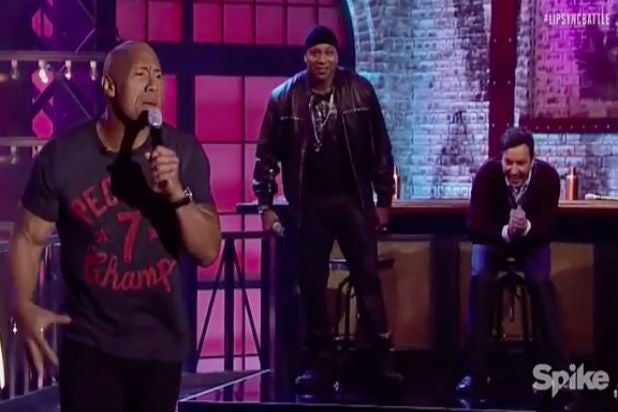 The series premiere at 10 p.m. drew 2.2 million total viewers — the largest viewership for an unscripted series debut in the network’s history.

In the 18-49 demographic most important to advertisers, the debut of “Lip Sync Battle” posted a 1.3 rating — also a Spike record for an unscripted series premiere.

With traditionally testosterone-centric Spike now actively courting a female viewership, the gender breakdown of the ratings provided good news for the network — 56 percent of the premiere’s audience in the 18-49 demographic was female. In the women 18-49 and women 18-34 demographics, the “Lip Sync Battle” kickoff was the highest rated series premiere in Spike’s history, notching a 1.5 and 1.4, respectively.

“The record ratings are indicative of the incredible talent and creativity of the producers and participants who delivered in so many ways,” Spike president Kevin Kay said. “We are incredibly encouraged by the balanced audience of the premiere as we continue our mission to target a broad viewership.”

The series, which is hosted by LL Cool J and directed by Beth McCarthy-Miller (“Saturday Night Live,” “30 Rock”), is executive produced by Eight Million Plus Productions, John Krasinski, Stephen Merchant, Casey Patterson, Jay Peterson of Matador and Rick Schwartz of Eight Million Plus.

On the social media front, the show was the top-ranked series on cable ad the second-highest ranked series across all networks.