TheWrap caught up with Lisa Barlow in Park City ahead of Wednesday’s “Real Housewives of Salt Lake City” reunion.

The Queen of Sundance had plenty of thoughts about the Season 3 ender, where Barlow will appear alongside Meredith Marks, Whitney Rose and Heather Gay. One castmate that won’t be at the reunion is Jen Shah, who chose not to attend after being sentenced earlier this month to 6.5 years in prison after pleading guilty to defrauding hundreds of people via a telemarketing scheme.

There were reports that Shah would get a solo sitdown with reunion host Andy Cohen, but those reports were shot down by Shah in an Instagram post.

“I will not be doing the 1:1 with Andy Cohen or Bravo because of their unwillingness to remove contractual provisions that would allow the network to legally make misrepresentations of me and my story, relating to any and all topics, prior to and during the course of my participation,” Shah’s statement read. “This specific 1 on 1 interview was not part of my RHOSLC reality TV contract. I promised myself and my loving family that I would not allow this portion of my life to be sensationalized or inaccurately conveyed.” 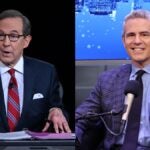 Also Read:
Chris Wallace Razzes Andy Cohen About ‘Real Housewives’ Franchise: ‘Are You at All Embarrassed by What You Do?’

“It’s a complicated question,” Barlow responded when asked by TheWrap if she wished the Jen Shah-Andy Cohen sitdown happened.

“On one side yes and on the other side no. I think she needs to have accountability for what we’ve basically been hearing for the last two seasons,” Barlow explained. “But there’s another part of me that’s like, ‘Do we reward bad behavior?'”

Read on for more Q&A with the Queen of Sundance.

Is there anything you wish you said as a reunion that you didn’t say?

I love everything I said. There’s probably one thing I wish I said. But I hope they keep it all because I have a feeling they will not. Because that was like eight hours of chatter.

Which of the new girls would you like to see back, if any?

Angie Katsanevas [Angie K]. She and I are great friends. We talk all of the time we’ve been friends for years. Her salon is responsible for my shiny, sleek locks.

Which reunion look outside of yours was your favorite?

I would have to say Angie Katsanevas. I did love my dress. I was definitely my favorite.

What’s your favorite Sundance event and why?

Okay, so this year for Sundance, I can’t just pick one. I would have to say definitely IlumiNative. It was so impactful. The fact that they had an Indigenous film as one of the top films of the festival, I think was everything. Blackhouse was amazing. Latinx House was amazing. WME is always fabulous. And CNN did an amazing pop-up. I can’t pick just one. But they were all so good and so different. And I think what I love most about all of them is they were promoting community, which I think is super important right now.

What’s the hardest part about Sundance?

For me, the hardest part about Sundance is the lack of sleep. I’m a high-energy person. I don’t require a lot of sleep, but Sundance I get none. So I think that’s probably the hardest. And another thing that’s really hard is there’s so much to do, and you can’t do it all. So I think that’s kind of hard too because there’s like times I want to be at a lounge or film and I can’t be at both.

What are the must-haves in your Sundance purse?

Number one is chapstick, With this altitude 7,000 square feet above sea level, I die without my chapstick. I have to have chapstick.

Also, my perfect lip-liner which right now is NYX from Ulta. It’s the perfect shade of like pink. I was a MAC girl for a long time with my lip-liners but with this NYX liner you have to break it in half and sharpen it so it’ll fit in your little micro bags. I love a little touchup of mascara and a little blush — the minis — in my bag.

And then I would have to say a bottle of water but not in this bag. I definitely need a second tote.

Check out Lisa Barlow in Part 1 of “The Real Housewives of Salt Lake City” Season 3 reunion airing Wednesday on Bravo. And more shots of the Queen of Sundance from Salt Lake City below: