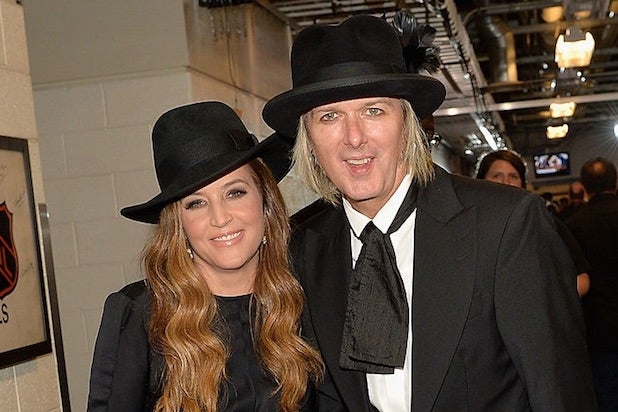 Lisa Marie Presley says that her eight-year-old twins have been placed in protective custody, after she discovered inappropriate photos of children on her estranged husband Michael Lockwood’s computer.

Court documents filed earlier this month in relation to the couple’s divorce proceedings say Lockwood “was discovered to have hundreds of inappropriate photos of children and is facing allegations of sexual abuse and neglect. While Respondent has not yet been convicted of crimes related to his possession of these photos, that he possessed them is documented evidence of conduct that has destroyed the mental and emotional calm” of Presley, the court papers claim.

In a declaration, Presley stated, “When I discovered the photos on Respondent’s computer, and viewed the videos, I was horrified and sick to my stomach. I had no idea that Respondent had taken these photos.”

According to the filing, the Beverly Hills Police Department executed a search warrant and removed “more than 80” of Lockwood’s devices, “which they have not analyzed and have not released.” In her declaration, Presley states, “My understanding is that Tennessee law enforcement is also conducting an investigation related to the photos and videos that I discovered.”

Presley and Lockwood were married in Jan. 2006 and have eight-year-old twins, Finley and Harper, who, according to Presley, “are temporarily under the care of DCFS [Los Angeles County Department of Children and Family Services] pursuant to dependency court orders.”

Presley filed for divorce in June 2016.

“Mr. Lockwood and his lawyers believe that it is very unfortunate and inappropriate that Ms. Presley chose to file a one-sided, inaccurate version of the facts in the Family Law Court’s publicly accessible files. Ms. Presley and her lawyers undoubtedly knew that their highly sensational, inaccurate and unproven claims would be of great interest to the media, which would disseminate Ms. Presley’s inaccurate story as a result,” Sturman said.

In her declaration, Presley — the daughter of music legend Elvis Presley — paints a grim picture of her finances. While she receives approximately $100,000 a month from her inheritance and a modest salary as an employee of Graceland, Presley says she has been saddled with “considerable tax liability” due to  the “gross negligence” of her business manager, and says that Lockwood spent more than $1 million of her funds without her consent.

Presley says that she’s had to take out loans from friends, and that she currently lives rent-free with her adult daughter Riley Keough and Keough’s husband.

“I do contribute to the household expenses by paying for Riley’s housekeeper, as well as additional household supplies,” Presley states in the court papers.