The first five episodes of the Hulu adaptation of Celeste Ng’s “Little Fires Everywhere” have had the benefit of being led by Reese Witherspoon and Kerry Washington, two critically acclaimed actresses playing two very different women.

Wednesday’s installment still features the “Big Little Lies” alum as the tightly wound, upper class Elena and the “Scandal” vet as the closely guarded, starving artist Mia, mothers who are at odds with each other as they tackle issues of class and race in an Ohio suburb in the ’90s. But the real stars of the episode are AnnaSophia Robb and Tiffany Boone, who were faced with the challenge of playing the younger versions of Witherspoon and Washington’s characters.

TheWrap spoke with Boone (“The Chi”) and Robb (“The Act”) in a joint interview to ask about their experiences shooting the backstory episode, which dives deep into Elena and Mia’s respective pasts, and trying to play Kerry and Reese without really playing Kerry and Reese.

“I think it’s a weird line where you’re not doing an impersonation, it’s just the essence of a character,” Robb said.

Also Read: 'Little Fires Everywhere' EP on Why the Hulu Series Differs So Much From Its Source Material

But at the same time, the “The Carrie Diaries” alum says she studied Witherspoon’s mannerisms and past work so closely that she’s “never felt like more of a stalker in my entire life.”

“The first time I met with her, she gave me a list of page numbers and quotations from the book that were really helpful, like, ‘Passion is like a spark and you have to contain it.’ So having those rooted ideas as a character were really helpful for me,” Robb said. “And then I would go on set and I would watch her and take notes and listen to her voice, and watch a reel of her movies and talk along with it to match her rhythm.”

Though Boone was cast later in the process than Robb and had less time to prepare, she too studied her older counterpart on set as often as possible to learn how to act like her — but not too much like her.

“For me, as far as the mannerisms, Kerry is a very specific actress and it was important to me also to not mimic or do an impression of her, but to make sure there are certain things you can look at the character and go, ‘Oh OK, I get it. That’s the same person,'” the “Hunters” star said. “Obviously, she has a very specific way she shows her mouth. And when she’s crying, she puts two fingers above her lip to stop her nose from running. And her fingers are always kind of spread apart when she’s talking. And that’s partially just who Kerry is, but also choices she was making as the character that were important to include. But at the same time, because it is the younger version of Mia, she’s become so hardened by the time we see her as an adult that it was important to me we see a lightness in her when she’s younger and a real optimism.” 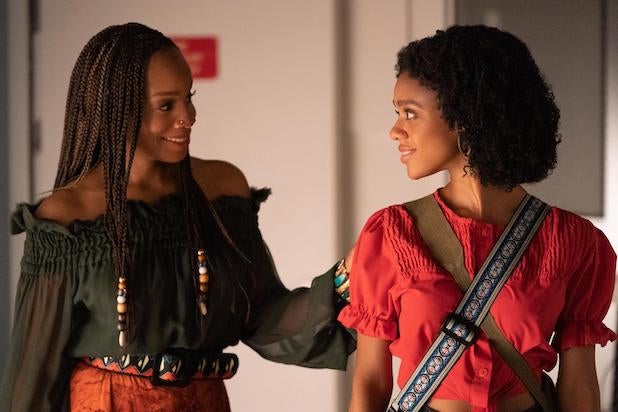 Episode 6, titled “The Uncanny,” takes us back in time to when Elena and Mia were young adults, long before they knew each other, and we’re just figuring out who they wanted to be in life. The installment deviates from the show’s source material in several ways, including giving Mia, who was not identified as a lesbian in the book, a romantic relationship with her now-dead mentor Pauline and Elena an extramarital affair with Jamie, an ex who didn’t exist in the novel, just after she’s had her fourth child, Izzy.

“I think the addition of having Pauline be a romantic relationship for her is really amazing,” Boone said. “One, because the connection between Mia and Izzy (Megan Stott) is stronger because of that, which you’ll see in the later episodes. But there is more of a connection there between the two of them as Izzy is trying to come to grips with her sexuality and Mia having had this lesbian or queer experience, right? But also, it’s really important because you don’t get to see her have, a real loving connection when she’s older, other than her daughter. And so to see her, not only with Pauline, but with her brother, just to see her in such a loving relationship that isn’t her daughter and see how that opens her up. I don’t think it’s just a romantic relationship, I think there’s a maternal aspect there that she didn’t get with her own mother that she’s fulfilling with Pauline. I just think you get to see so many layers to her that you don’t get in the book, so it was really exciting to be able to play those things.”

For Robb, Elena’s one-night stand, which happens while she’s suffering from postpartum depression, and how she handles herself afterwards speak volumes about how she became who she is by the time Witherspoon takes over the role.

“It’s such an opportunity to be able to see why these women, these mothers, behave the way they behave,” she said. “And I think it makes Elena– like, she’s so tightly wound. We get to see her, especially in Episode 5, be this young and bright woman and she’s still very concerned with planning her life, but we see that it could have gone just a completely different direction. And that her sort of ‘being on’ and scraping for control of it is because she has to survive with the decisions that she’s made. So the relationship with Jamie in Episode 6, I think it makes her less of a perfectionist.” 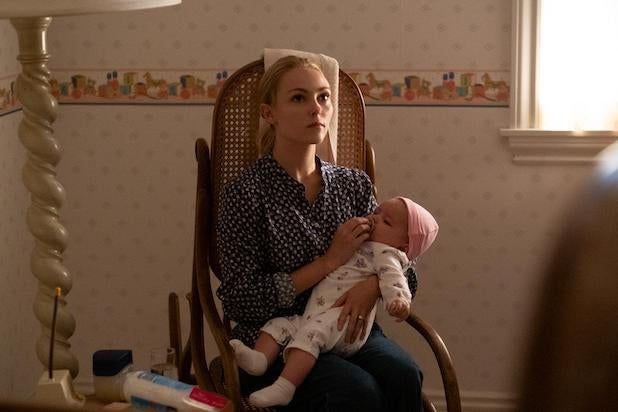 Robb continued: “We see her make this huge mistake and fully not know who she is and feel completely not in control of her body or her emotions and this life that she thought she wanted so badly, just completely veer out of control. And then that decision of choosing her children, and choosing her family ,and going back to it, and having to kind of convince herself to not even look at or see the other life that she could have had. And so I think it’s interesting when you juxtapose the older Elena, when she goes back to visit Jamie earlier in the season, and it makes more sense and it informs both of those characters going forward.”

The episode also helps to show that Elena and Mia are more similar than they think they are in the present day.

“It connects the two of them,” Robb said. “I think we see the similarities between these two women who seem so different in the story and yet they seem a lot closer together in these flashbacks. You see them making sacrifices for their children, making sacrifices for the lives that they wanted to have. And we see that similarity in the flashbacks.”

When it came to actually shooting the episode, Boone and Robb had very different experiences.

“Reese didn’t come and watch, which I’m very happy about, because I would have felt really weird,” Robb said. “But, then again, I guess I was watching her, so that’s a double standard. Reese was just really encouraging. She just expressed excitement and stuff.”

When Robb revealed this during the interview, Boone told us that Washington had been on set almost every single day while she was shooting, to which Robb replied: “Oh my God, I would have died. Wow.”

“Kerry was on set every day I was shooting except one, which was my first one,” Boone said. “Which, thank God she wasn’t there for the first day. It was very nerve-wracking, especially at first, and then I got used to it. She was kind of doing it the way I was watching, which was I didn’t necessarily know when she showed up. She’d just be there and I’d be like, ‘Hi Kerry!’ and she was like ‘Hi!’ And I’m sure she had notes to give, but she probably gave them to the director and then I got them. But she was so supportive the whole time, every time she would be like, ‘You’re doing great. Just keep going.’ And she never overstepped any boundaries. But she was definitely there all the time (laughs).”