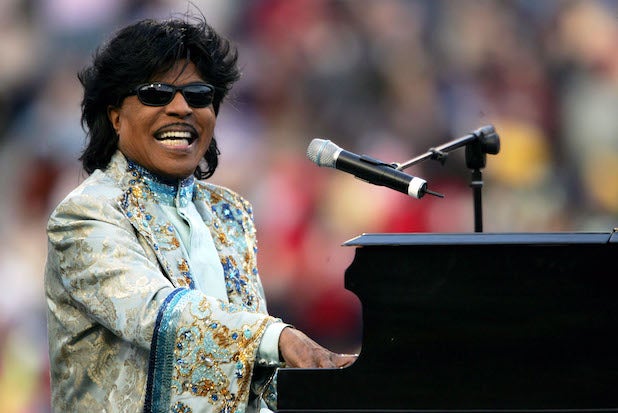 Little Richard was a legendary singer, a pioneer of rock ‘n’ roll — and he was also a wedding officiant to the stars.

Following Little Richard’s death on Saturday at the age of 87, tributes poured in where many celebrities, such as Demi Moore and Cyndi Lauper, reminisced on when “the architect of rick and roll” officiated their weddings.

“Bruce and I were so lucky and honored to have him officiate our wedding back in 1987 — thankful for the memories,” Moore tweeted, along with a picture of her and Bruce Willis.

Lauper also took to Twitter to share that Little Richard married her and David Thornton in 1991, and the couple is still together today. Similarly, Steven Van Zandt shared that his wedding to his wife Maureen was the first wedding Little Richard conducted.

And according to a Chicago Tribune article, Little Richard also married Tom Petty and Dana York on June 3, 2001. “He did yell, ‘Shut up!’ at one point,” Petty said in the article. “He was really nervous, but so was I. He gave a long talk about love and its characteristics, and what it shouldn’t do. He was pretty inspirational.”

Little Richard even made a “surprise” appearance at Bo and Nora’s first interfaith wedding on “One Life to Live” in 1995, where he performed. You can watch it here.

Little Richard is worshipped by anyone who loves rock and roll. He officiated Tom’s wedding to Dana York and having him there that day filled him and everyone in attendance with joy, awe and delight. He will be sorely missed by the music community. ♥️ to his family pic.twitter.com/tnCj0qRkpi

Tom Petty married Dana York on June 3, 2001. The minister was Richard Penniman, AKA Little Richard. "He did yell, 'Shut up!' at one point," Petty chuckled. "He was really nervous, but so was I. He gave a long talk about love and its characteristics. He was pretty inspirational." pic.twitter.com/J0wLZJ5i5j

Remembering #LittleRichard today… Bruce and I were so lucky and honored to have him officiate our wedding back in 1987 — thankful for the memories. Rest easy ❤️ pic.twitter.com/MFU347Ogij

RIP Little Richard. The man who invented It. Elvis popularized it. Chuck Berry was the storyteller. Richard embodied the Spirit of RocknRoll. Maureen and I were so honored being the first marriage he conducted. Were lucky to know him. He lives forever in the Underground Garage.