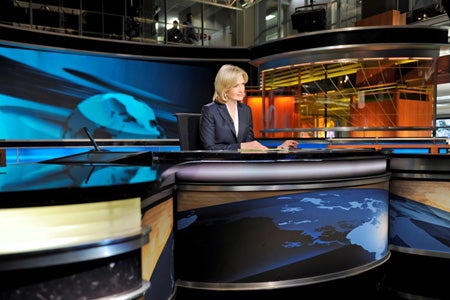 ABC may be trying to downplay it, but we’re not.

Diane Sawyer anchored her first "World News" newscast on Monday evening, three days after Charles Gibson vacated the role, creating an opening for Sawyer to move from her familiar role as host of ABC’s "Good Morning America." The nightly news spot was a job Sawyer has long coveted.

Refresh this page for updates beginning at 6:30 p.m. EST …

5:30PM: Before we get cracking, here’s a behind-the-scenes preview of Sawyer at work today, via TVNewser. Fun fact: She wears hoodies — and glasses — in the newsroom.

6:30PM: Dressed in a stately blue blazer and white blouse, the Sawyer Era begins: "It is so good to be here with you tonight …"

6:36PM: Story #3: "Nation’s dramatic drops in crime." This has got to be the dream news lineup for a network trying to downplay a debut.

6:37PM: Sawyer flubs the teaser before the first commercial, refers to "presents" as "presidents." Not entirely her fault as the control room flubbed the video roll, which was showing a clip of her exclusive interview with Mahmoud Ahmadinejad while Sawyer was trying to tease a Christmas story.

6:51PM: Brittany Murphy update: Nothing we didn’t know this morning. Sawyer handled it well, though.

6:52PM: Obama’s surprise visit to a D.C. Boys and Girls Club. Another softball.

6:53PM: "Nailbiting time for Christmas procrastinators." Ooh. Seriously, are all nightly network newscasts exactly like the morning ones?