Liza Minnelli does not “approve nor sanction” Renee Zellweger’s upcoming film about her mother Judy Garland, and took to Facebook to share a Radar Online story that was “100 percent fiction.”

“I have never met nor spoken to Renee Zellweger,” Minnelli wrote on Facebook on Thursday. “I don’t know how these stories get started, but I do not approve nor sanction the upcoming film about Judy Garland in any way. Any reports to the contrary are 100 percent fiction.”

The caption accompanied a Radar Online post that was titled, “Renee Zellweger Bonds With Liza Minnelli While Playing Mom Judy Garland in Biopic.” The story has since been removed from the site.

Roadside Attractions and LD Entertainment are distributing “Judy,” which will be directed by Tony-nominated and two-time Olivier-winner Rupert Goold. The script was written by Tom Edge (The Crown) and based on the stage play “End of the Rainbow” by Peter Quilter.

“Judy” will take place in 1968 when “The Wizard of Oz” star arrived in London to perform in a sell-out run of “The Talk of the Town.” As Garland (Zellweger) prepares for the show, battles with management, charms musicians and reminisces with friends and adoring fans, her wit and warmth shine through. Even her dreams of romance seem undimmed as she embarks on a courtship with Mickey Deans, her soon-to-be fifth husband. The film will feature some of her best-known songs, as it celebrates the voice, the capacity for love, and the sheer pizzazz of one of the world’s greatest entertainers.

Representatives for Zellweger, LD Entertainment snd Roadside Attractions have not yet responded to TheWrap’s request for comment. 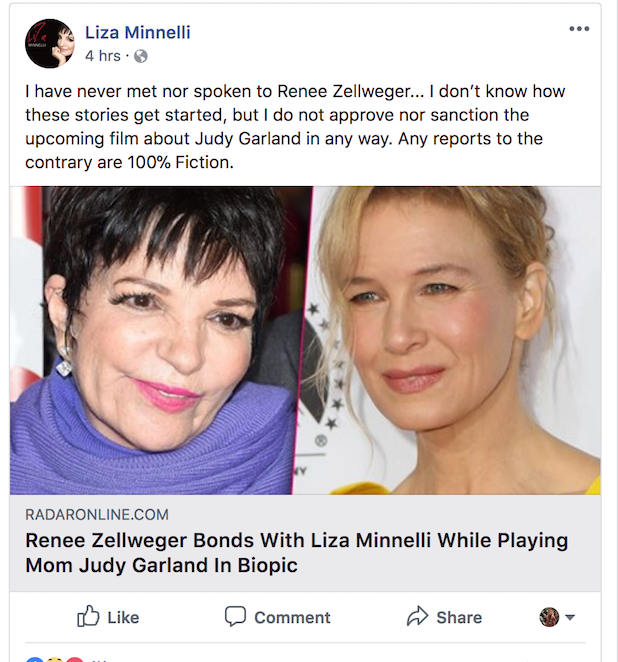