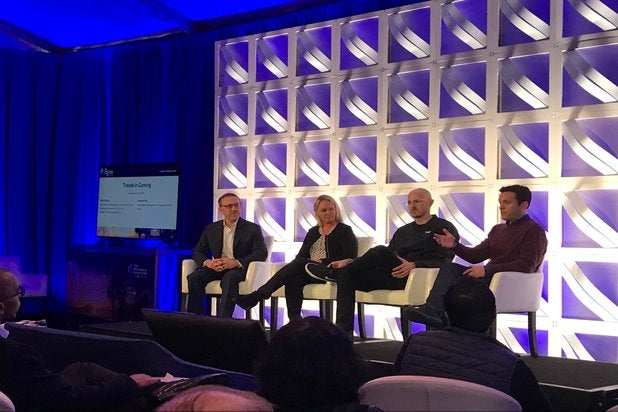 Fear of the Coronavirus spreading has prompted closure of numerous events in the gaming world and caused some tech companies to direct their staffs to work from home. But leading gaming executives in Los Angeles say this time that people spend inside could be good for the gaming industry.

On stage at the 2020 Montgomery Summit in Santa Monica, gaming investors and the leaders of Los Angeles’ gaming industry shared what they saw as the possible advantages to the growing epidemic.

Hope Cochran, managing director of Seattle-based Madrona Venture Group, which invests in gaming, said she thinks the quarantines will lead people to play more games to pass the time.

“In the casual gaming world, we always have the phrase snow days, we love snow days. Our business analytics would shoot up, there was always big peaks whenever it snowed. I view this as similar for that sector,” Cochran said during the presentation. “When you are at home unexpectedly with not as much on your calendar, the activity (gaming) definitely increases, and those are usually positive monetary days.”

Tech companies including Facebook, Google and Microsoft asked their staff in the Seattle area  Thursday to work from home. Washington state has been severely impacted by the virus so far, with at least 10 deaths in the state. Amazon confirmed Thursday it was directing all its non-warehouse employees to work from home indefinitely, and Sony shuttered three European offices for the week.

All these tech-savvy employees out of the office are a demographic expected to game heavily while they are home.

“I know what would happen if I asked my staff to work remote,” Jon Robinson, chief operating officer of Culver City-based esports organization 100 Thieves, said onstage. “There would be no productivity, and a whole lot of gaming,” Robinson joked.

“I do think people will be playing more, there’s always a hurdle to get over before you can really find yourself connected to a game, and this is a great opportunity for people to find themselves crossing that hurdle,” Ari Segal, chief executive of Los Angeles-based esports team owner Immortals Gaming Club, said onstage at the Summit.

“For all of us that are on the digital side of things, it’s unfortunately a bad thing for the world, but a good thing for consumer entertainment companies,” Segal added.

Gaming events that require in-person participation, like esports events, are being hit hard by concerns over the virus. Leagues including Riot Games’ Korean and Chinese “League of Legends” Championships are suspending play, citing concern the events could turn into a breeding ground for the virus.

“From what I’ve seen so far, the esports calendar is going to get devastated this year because of coronavirus issues,” Segal said. “That’s been a challenge.”

Also Read: Apple Backs Out of South by Southwest Due to Coronavirus Worries

Segal said he was considering postponing a private event in Los Angeles due to coronavirus concerns.

The coronavirus’ impact on esports could be wide-reaching if investors begin to lose confidence in the business model, which relies on bringing together large teams of players and coaches in often-crowded arenas. While the matches can be live-streamed, teams still have to convene in the same location to play.

Segal said he is watching how investors and potential event sponsors react to the virus’ impact on esports. Sponsorship and brand advertising are huge revenue streams for esports organizations, next to ticket sales and merch.

“For esports teams and organizations, there’s a tension where certain investors are interested in the fundamentals (while) others want to see top-line growth, (and) the first thing that’s going to be pulled back if there is a coronavirus impact on the economy is speculative sponsorship budgets,” said Segal.

“If those (sponsorship) budgets get pulled back or decrease, all of a sudden certain investors are going to be less bullish on esports investment,” Segal added.