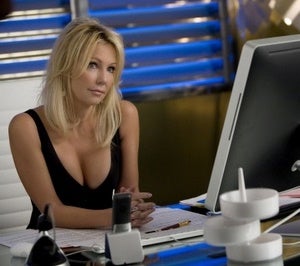 The magical ratings-boosting power of Heather Locklear delivered a modest kick to The CW’s rebooted “Melrose Place” Tuesday. Whether she’ll save the show, however, remains to be seen.

With Locklear reprising her Amanda Woodward character on the rebooted series for the first time Tuesday, the show experienced only a nominal 14 percent bump in total viewers from the previous week, according to Nielsen data, with the show spiking to an audience of 1.5 million.

Happily for The CW, among the network’s money demo – females 18-34 – the show increased its viewership 33 percent.

Meanwhile, another remake is beginning to experience ratings troubles of its own after an incendiary start two weeks ago: ABC’s “V” dropped another 18 percent in total viewers to 9.3 million on Tuesday.

Faring better these days, however, is NBC’s “The Jay Leno Show,” which had its second straight night of increased audience size (up 5 percent to 6.1 million). It was “Leno’s” biggest turnout in six weeks.

(NOTE TO READERS: Josef Adalian is sick and won’t be posting until he’s better. TheWrap staff will be filing to TVMoJoe until he returns.)