”When we meet for the first time, you might almost say ‘we don’t know this man,'“ Stewart told TheWrap of inhabiting Jean-Luc Picard after 20 years

Jean-Luc Picard was the one role Patrick Stewart thought he would never play again. And if it wasn’t for James Mangold and Hugh Jackman, he probably never would have put that Starfleet badge back on, which he wore for 7 seasons on “Star Trek: The Next Generation,” and four feature films.

Stewart starred alongside Jackman in Mangold’s “Logan,” where he played a way-past-his-prime, 90-year old version of Charles Xavier, the leader of the X-Men known for his unlimited hopefulness. But this was a starkly different take from what fans of the original “X-Men” were used to; in “Logan,” Stewart portrayed a hollowed out, broken-down Xavier.

That experience convinced him to return after nearly 20 years to “Star Trek,” beginning Thursday with the debut of CBS All Access’ “Star Trek: Picard.”

“I brought up ‘Logan’ at my second meeting [with the producers] and talked about the impact that had on me,” Stewart told TheWrap. “I got some inspiration from the fact that Hugh had really encouraged the story of ‘Logan’ should follow the line that it did. He wanted it to go downhill and crash and burn. I was intrigued by how much he wanted that. It helped me when I pitched my feelings about this.”

“Logan” is heralded as one of the best takes on comic book material ever, with Mangold’s script garnering an Oscar nomination for Best Adapted Screenplay. Alex Kurtzman, who is captaining the entire “Star Trek” universe for CBS All Access, is keenly aware of how foolish it would be to make any comparisons to that film.

“You don’t go in and say, ‘We’re going to make this as good as ‘Logan.’ Because we would’ve just failed,” he said. “What we didn’t want to do is repeat ‘Logan.’ We needed to do our own version of it; take the spirit of what worked about the approach.” 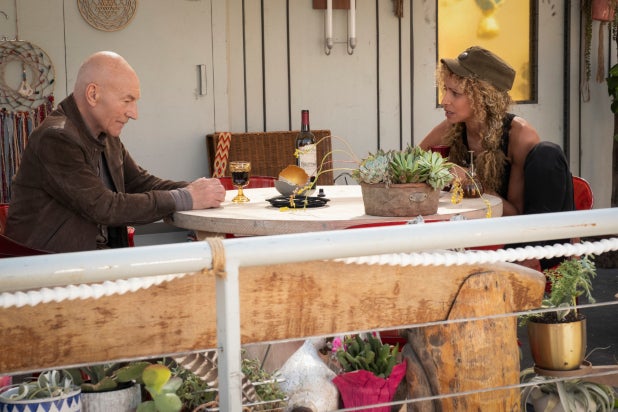 “Star Trek: Picard” finds the now ex-Admiral living in isolation on the Picard family vineyard in France, having walked away from Starfleet 14 years earlier. “He was so troubled at the start of episode one,” Stewart said. “When we meet for the first time, you might almost say, ‘We don’t know this man.’ But he’s clearly still Jean-Luc Picard. He hasn’t been transformed physically, but there is something wrong. Seriously wrong.”

Stewart hopes that narrative jumping off point is what will keep viewers interested, especially those shocked to see Picard in such an unfamiliar state. “I hope that’s going to be the curiosity that will affect our audience.”

For longtime “Star Trek” fan and now “Picard” showrunner Michael Chabon, he was adamant that this series would not simply be a fan service rehash of “The Next Generation.”

“As soon as you started to watch that, it would disappoint you. You can’t go to the same river twice,” he explains. “There would be no way to recreate, not just ‘TNG,’ but that experience of watching ‘TNG’ and the experience of discovering ‘TNG.’ That’s over.”

Also Read: TV Execs Predict How Streaming Will Shake Out in 2020: ‘It Will Be Like ‘The Hangover”

Akiva Goldsman, who is an executive producer on the series, said, “We pointedly didn’t want to sequelize Next Generation.” Without that mindset, there was no way they would have been able to beam up Stewart, who was very hesitant to boldly go where he’d already been before.

He began his first of two meetings with the show’s producers by telling them why he was going to turn it down. But after that first meeting, they sent him a 35-page outline for the show, which he says “got my attention seriously.” He sent back his own notes, and agreed to meet again. That second meeting lasted almost three hours, he recalled. “By the time it was done, I was pretty certain that this was a project I needed to be part of. It’s got a lot to say about a world that we never touched on before.”

The world of 2020 is very different from the world of 1994, when the show aired its final episode (though the characters would continue on in films, with the last one coming in 2002 with “Star Trek: Nemesis). Goldman said they leaned into that. “We have a character who is beloved. for whom 20 years have past. That’s really true in time in the life of the actor. To be able to actually do that with a character, that’s actually so much more interesting.”

Despite the 20-year gap, Picard never left Stewart. “It really wasn’t that strange. Picard was inside me, and so I just had to unlock the door and let him out. And then look around and find that the world had changed, and its impact on him.” 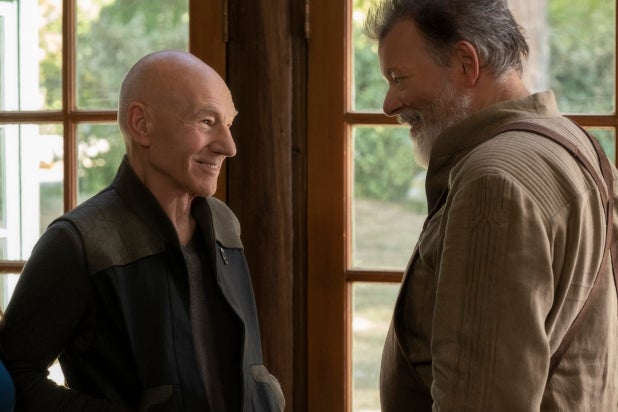 While “Picard” may not be a “Next Generation” redux, it does feature many “Star Trek” alums, including Jonathan Frakes, Jeri Ryan, Jonathan Del Arco, Marina Sirtis and, most surprisingly considering his demise at the end of “Nemesis,” Brent Spiner as the android Data. Kurtzman explained that Data’s involvement in the story was his first priority, along with Picard’s nemesis The Borg.

“We moved away from the Borg idea for awhile, and then organically as we started figuring out what we wanted to say, the Borg came back in a very unexpected way.”

For Ryan, whose Seven of Nine was part of “Star Trek: Voyager,” her appearance will be the culmination of a long-anticipated meet-up between her and Picard. “It was my first time acting with him,” she said “I’ve heard over the years so many fan comments wishing they could see the two characters together.”

Added Del Arco, who will reprise his role as Hugh the Borg: “‘Star Trek’ changed my life. How do you say no to something like that?”

Chabon said they were very careful about which alums to bring back, not wanting to turn “Picard” into one giant reunion show. “The approach that we took was to try to be as organic as possible, once we understood the kind of story we wanted to tell,” he said. “It was tempting a lot of times… it’s so tempting.”

Kurtzman promises that, even though they will “go to very dark places,” the show will not completely shun the ideals that Gene Roddenberry infused within “Star Trek” from the beginning. “‘Star Trek’ is still a fundamental vision of optimism. When you betray that, I think you’re betraying ‘Star Trek.'”