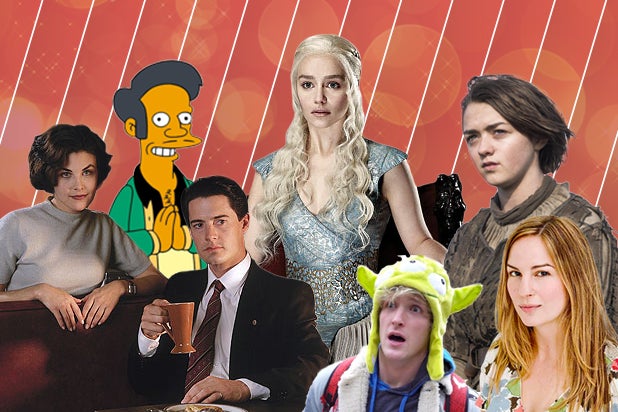 With all due respect to PBS’ second day of presentations in the Langham Huntington Hotel in Pasadena, California, the Television Critics Association Winter Press Tour has (mercifully) come to a close.

TheWrap sat through about 1,000 panels from what feels like 100 platforms over a legitimate 13 days (and attended probably a dozen parties, where we consumed [REDACTED] drinks). All told, we wrote roughly a million stories.

We can boil that down further though. In recognition of the new year, below are 18 things we learned from the first (of two) TCA of ’18.

Paige Davis Has a Different Design Sense Than Joanna Gaines
Don’t expect to see a bunch of shiplap on the revived “Trading Spaces”: Paige Davis isn’t a fan of Joanna Gaines’ (HGTV’s “Fixer Upper”) favorite wood siding. The TLC personality made her negative feelings on the trend known while occupying the stage, eliciting laughter from the folks that got that message loud and clear.

“The idea that anybody, young or old, past or present, was bullied or teased or worse based on the character of Apu … it’s distressing,” the voice behind Indian immigrant Apu Nahasapeemapetilon said. “The idea that anybody was marginalized based on it or had a hard time was very upsetting to me personally and professionally.”

And Bobcat Goldthwait wants to direct.

Why “Game of Thrones” Season 8 Has to Wait
It’s the special effects, man. Do you know how long those dragons take to come to life? HBO chief Casey Bloys does, and he gave us a rough idea here.

“Could we force them to do something — to come back early? I suppose we could force it,” he told us. But that’s just not how they roll.

Mira Sorvino Is Finally Busy
Mira Sorvino says Harvey Weinstein had her blacklisted after she rejected his advances — but her phone’s been ringing lately.

“I have to say the general atmosphere since those allegations came out, those revelations, there seems to be a lot of goodwill towards me in the entertainment business and I’ve been getting offers,” she told reporters.

Basically, she didn’t want to feel “sh—y” about herself, in Clarkson’s words.

Why “Rise” Turned a Gay Character Straight
NBC’s “Rise” is based on a true-life story of drama teacher Lou Volpe, a gay man, but when the drama premieres in March, the lead character played by Josh Radnor will be a straight man.

“We took [the book] as an inspiration, and then I really felt like I needed to make it my own story,” showrunner Jason Katims said. “With Lou’s family life and Lou’s family itself, there’s a lot of re-imagination. Not just in terms of gay or straight, but in terms of the family structure.”

Also Read: Logan Paul Still Has 'Opportunity to Prove' Himself to YouTube

Don’t Hold Your Breath for More “Twin Peaks”
Guys, it took David Lynch like 25 years to bring “Twin Peaks” to Showtime for a revived run. So don’t expect it to just be another year or two before he does it again.

Still: “The door at Showtime is always open for Mark [Frost, co-creator] and for David — for ‘Twin Peaks’ or anything else they want to talk about,” the premium-TV channel’s Gary Levine said.

But How About More “Fargo”?
OK, this one is good news. More “Fargo” should hit FX in 2019, and Jon Landgraf seems pretty excited about Noah Hawley’s new (top secret) idea.

“Robbin’ Season, for most of you that I guess don’t know, is a time in Atlanta right before Christmastime and New Year’s,” the executive producer and writer said. “Basically, a bunch of crime happens in the city right during that time.”

Furguson the Cat May Be a Goner
Someone’s gonna die on the final season of Fox’s “New Girl.” TheWrap may have uncovered that it’s Furguson, Winston’s (Lamorne Morris) beloved cat.

Sorry for the spoiler, and for the (probably) dead cat.

Marcia Clark May Have Just Solved Casey Anthony Case
Marcia Clark was unsuccessful in prosecuting O.J. Simpson, but she may have just convicted Casey Anthony of murder. The A&E docuseries host says her show has uncovered some “pretty big” new evidence that points to Caylee Anthony’s mom in the young girl’s death.

Logan Paul Could Still Return to YouTube
Logan Paul has been downgraded and suspended from YouTube — but it’s not a lifetime ban.

Glenn Howerton’s Dennis Ain’t Dead Yet
One of the biggest ongoing dramas in sitcom-land is whether or not Glenn Howerton return to “It’s Always Sunny in Philadelphia.”

At TCA, Howerton said he “has not officially left” the FXX comedy, and that his “A.P. Bio” schedule would “absolutely” allow him to do both. You know, if he wants to.

Also Read: Jenna Fischer on 'The Office' Revival: 'I Haven't Been Approached'

Jimmi Simpson Is Returning to “Westworld” – And Maybe the USS Callister
Jimmi Simpson confirmed that he’ll be back on “Westworld” for Season 2, but we’ve got bigger fish to fry here: WILL THERE BE A “U.S.S CALLISTER” SPINOFF???!?

“I’ve heard little buzzes,” Simpson told reporters about a standalone series based on his popular “Black Mirror” episode. “But I don’t believe anything until I’m working on set. I would love it.”

“This show does have an element of shows that I grew up loving, like ‘Fame,'” Murphy said of recasting his show’s dance instructor. “We needed a Debbie Allen character, to be blunt. And that’s what we decided to do.”

“Coming up with a title is one of the most challenging things that we do,” ABC Entertainment President Channing Dungey told TheWrap.

Ironically, “Grey’s Anatomy” itself didn’t have a title almost until premiering.

See you in July.

Sundance 2018: Streaming companies and indie distributors will battle it out for these movies

Park City, Utah, is about to be flush with cash -- and we're not talking about buying apres-ski gear. Here are the most promising sales titles of the 2018 Sundance Film Festival.