Lindsay Lohan’s not on the lam from the law anymore — or, at least, she won’t be arrested when she finally does show up in LA.

Representatives for the Cannnes-stuck actress, who missed a mandatory probation progress report court appearance Thursday due to a reportedly stolen passport — late Thursday afternoon posted about 10 percent of the $100,000 bond that had been imposed. 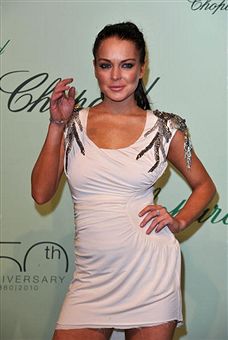 During the morning session, a clearly annoyed Judge Marsha Revel slapped the actress with the bail, a bench warrant, strict conditions – including no booze at all, wearing a SCRAM bracelet to monitor any alcohol use and random weekly drug tests – and some harsh words on Lohan’s behavior.

The posting of the bond recalls the warrant, though, according to court officials, the conditions will likely still be enforced when Lohan makes it back to the United States.

Lindsay Lohan now has a temporary passport and will likely be back in L.A. by Friday afternoon, a individual close to the proceedings has told TheWrap.

Judge Marsha Revel said in court Thursday that she would see Lohan during court hours, if Lohan is back in the country by then. If Lohan doesn’t make it back by court closing at 4:30 p.m., her case will be held over to be heard next week by a substitute judge, as Revel will be on vacation.

Lindsay Lohan’s probation has been revoked and an arrest warrant — with bail set at $100,000 — has been issued for the troubled actress, who missed a Thursday morning hearing because she’s stuck in Cannes claiming her passport was stolen.

Judge Marsha Revel also ordered that if Lohan (photo at left is Lohan at a party in Cannes) makes her bail, it will be on the condition that she not drink any alcohol, that she wear an alcohol-measuring device, and weekly random drug testing will begin.

In a press conference outside the downtown Los Angeles courtroom following the hearing, the actress’s lawyer, Shawn Chapman Holley, admitted there might be a chance that her client will be arrested at the airport when she does arrive back in the U.S. — though she stressed she hoped that would not be the case.

With Lindsay’s estranged father, Michael Lohan, sitting in the front row, Holley argued that the conditions were “inappropriate” for what she calls “an essentially DUI case.”

Judge Revel disagreed with the lawyers’ analysis, citing the actress’s past charges, including a cocaine incident, and Lohan’s frequent court appearances and tardiness.

“She has a history of not keeping scheduled appointments,” said Judge Revel, “I couldn’t have been more clear about the importance of this case.”

Holley promised to the court that Lohan, who is in the process of getting a replacement passport and traveling back to the U.S., would be home “by late afternoon tomorrow, at the latest.”

That halted any immediate discussion of leniency.

Holley also pleaded that it was Lohan’s intention to return from France two days ago, to attend her alcohol program on Wednesday and make today’s hearing.

To which the judge responded: “If she wants to be here, it looks like she could have been here.”

Judge Revel, who is scheduled to be on vacation next week, says she will schedule a hearing with Lohan on Friday – if the actress arrives in time.

Otherwise, Lohan’s case will be heard by a substitute judge in Revel’s absence. 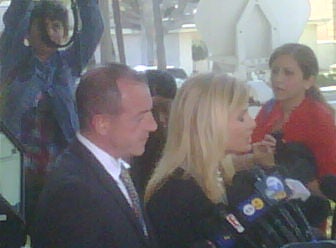 With his lawyer Lisa Bloom by his side, Michael Lohan, Lindsay’s father (left, photo by Dominic Patten), told the assembled press that he recommended his daughter be sent to a rehabilitation program and all members of the Lohan family start attending therapy together.

"I love my daughter," Michael Lohan told TheWrap outside the courtroom. "And I want her to get better."

Lindsay’s father also noted that he did not think jail would be the best remedy for Lindsay.

Lindsay Lohan’s luck with the law might have just run out.
An arrest warrant likely will be issued for the actress Thursday if, as expected, she does not make a mandatory appearance at her probation progress hearing Thursday morning in Beverly Hills.
Lohan, according to what her lawyer Shawn Chapman Holley told L.A.’s ABC7 early Thursday, is still stuck in France at the Cannes Film Festival, unable to return to home because her passport has been stolen.
Holley said the actress, who was at the festival promoting her role in an upcoming biopic of ‘70s porn star Linda Lovelace, tried to board a flight Tuesday to make it back for the hearing before Judge Marsha Revel, but was refused because of lack of documentation.
The lawyer says Lohan is in the process of getting a replacement passport from the American Embassy.
Attempts by TheWrap to reach Shawn Chapman Holley for more information were not returned immediately.
Judge Revel could, in accordance with standard court procedure for missed court appearances, issue a bench warrant for Lohan if she does not show up as ordered.
This is not the first time in recent weeks that jail time has been rumored for the actress; the Superior Court judge has expressed concern that Lohan has not been meeting the requirements of her alcohol education classes.
The classes, which Lohan is expected to attend once every seven days unless she is in rehab, are part of her three-year probation from a 2007 guilty plea for driving under the influence of alcohol and cocaine and reckless driving. Lohan’s lawyer, as TheWrap previously reported, did admit there had been some “misunderstandings” in the past. However, now, Shawn Chapman Holley said, “Ms. Lohan is in substantial compliance with the conditions of her probation."
In documents filed with the court earlier this month, Charles Marshall, the director of the Right On Programs Inc., stated that Lohan is in “program compliance” and “now attends regularly and consistently communicates in a timely manner to reschedule if necessary.”
The “Mean Girls” actress, whose recent comeback attempts seem to constantly go two steps forward and three tabloids back of late, is expected back in the United States by the weekend once she has a new passport.