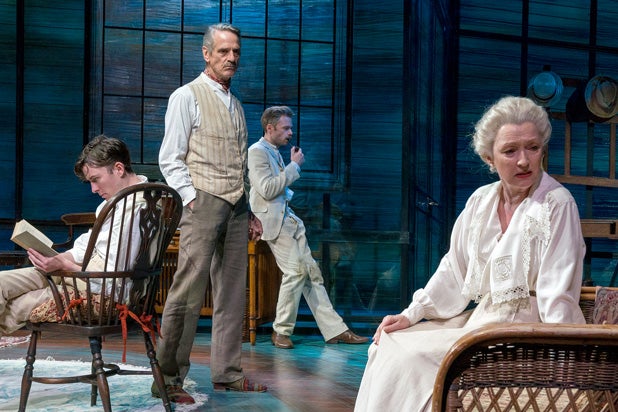 Just two years after Jessica Lange won a Tony for a Broadway revival of Eugene O’Neill’s epic tragedy “Long Day’s Journey Into Night,” the British actress Lesley Manville brings a strikingly different approach to the woman at its center in Richard Eyre’s compelling but flawed new production, which opened Sunday at Brooklyn Academy of Music. (The revival, which originated at the U.K.’s Bristol Old Vic in 2016, comes to L.A.’s The Wallis next month.)

Where Lange brought a plus-size languor to Mary Tyrone, the morphine-addicted woman modeled on O’Neill’s own mother, Manville is an almost combustible dervish of energy who careens among the men in her life in the seaside Connecticut home where the play is set.

Chief among them is her husband, a once-great actor who has settled for popular melodramas and the comfort of his tight-fisted ways. Jeremy Irons plays the role with an almost patrician hauteur that’s subtly effective despite its departure from O’Neill’s description of the character as, basically, an Irish peasant.

Similarly, the Tyrone sons seem to hail not only from different families but from different schools of acting: Rory Keenan plays older son Jamie, the failed actor, in an overly broad way, relying on extremes of vocal inflection, while Matthew Beard brings a dancer’s physicality to the more sensitive younger son, Edmund, the book-reading poet manqué whose fateful diagnosis of tuberculosis triggers Mary’s final undoing.

It’s one of many incongruous elements of Eyre’s production — including Rob Howell’s set design, which features period furniture but a modern, skylit glass-house that sometimes distracts from the proceedings and leaves the staircase off-puttingly upstage and in shadows.

As she does in her Oscar-nominated role in last year’s “Phantom Thread,” Manville commands our attention even when she isn’t speaking. Her Mary Tyrone is a woman of raw nerves who convinces us that morphine offers a retreat to a past with missed opportunities — of life as a nun, of a happier marriage to James, of a home life where another son had not died in infancy.

Also Read: 'The Iceman Cometh' Broadway Review: Denzel Washington Is on a Mission

She convinces us too of the intolerable present state of the Tyrone clan — one which, like all too many families, knows precisely what buttons to push with each other to inflict the worst possible wounds. And the fact is that all of them seek a chemical retreat from their distractions — the men, to alcohol, and Mary herself, to morphine.

None of them can retreat from the devastation of the play’s final scene, where the three and a half hours of needling and recriminations build to a climax from which there is no escape.