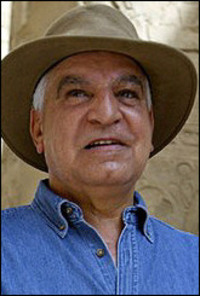 Our friend Zahi Hawass’s mug was on the front page of the Times again today. What is it this time? A landmark discovery of the mummy of Queen Hatshepsut, based on the surprising, unexpected find of a tooth in her long-familiar sarcophagus. The exciting news was ably chronicled by John Noble Wilford. But the key to the entire exercise was snuggled in the middle of the piece: "The search for Hatshepsut’s mummy by Egyptian archaeologists and medical scientists will be described in a television program, “Secrets of the Lost Queen of Egypt,” scheduled for July 15 on the Discovery Channel." Et voila! Zahi does it again! This will be Exhibit A in the thesis that front-page finds by Egypt’s Indiana Jones usually precede some major exhibit of television special featuring — you guessed it — Zahi Hawass. Here’s the rest of the piece.