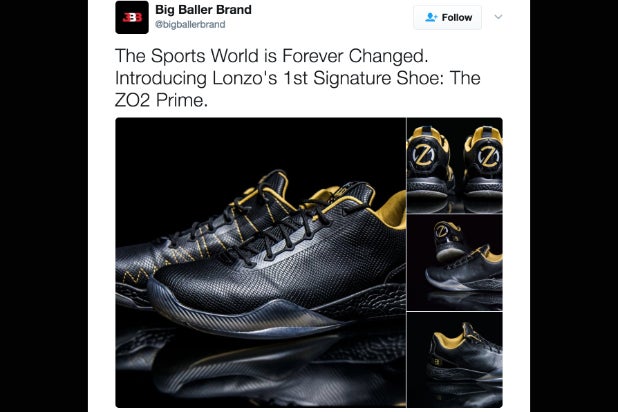 Social media began to pick apart the shoe as fast as it was unveiled. Besides the fact, that Lonzo Ball, a UCLA Basketball phenom, has yet to even be drafted to the NBA, people are upset that they’re expected to pay almost $500 for shoes that are seemingly knockoffs of Kobe Bryant’s signature Nikes.

For a sense of how… optimistic Lonzo is about his future legacy, according to ESPN the highest price for a pair of Michael Jordan-branded shoes was $400 — but he was, well, Michael Jordan. Lonzo, just so we’re clear, hasn’t even been drafted by the NBA yet.

Others simply ridiculed the entire product, blasting Ball for thinking he could get away with charging so much for a shoe that’s not even all that unique.

“Who the hell does lavar ball think his son is charging almost 500$ for his off-brand james harden lookin shoe,” mocked one Twitter user.

Lavar Ball defended the shoe with tweet right of the Marie Antoinette playbook, stating that you’re not a baller if you’re complaining about the price.

See the best replies below.

When you catch LaVar Ball in traffic after spending $495 on Kobe 11 bootlegs pic.twitter.com/Ew1AX0VBEN

Some of us defended Lavar Ball. Some of us mocked him. He just hopped on social media and called all of us broke. Can't even be mad. pic.twitter.com/MqZGOdHCmo

Lavar Ball is crazy if he thinks people will buy those off brand buddies for $495. They better come with $493 in the box

If you don't think Lavar Ball will open a factory in his basement to make shoes for his family, you don't know Lavar Ball