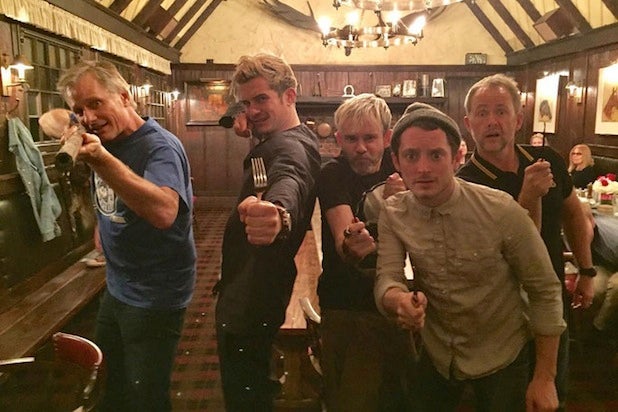 It’s enough to make “Lord of the Rings” fans lose their minds.

Alumni of the “Lord of the Rings: The Fellowship of the Ring” reunited to celebrate the 15th anniversary of the film that kicked off Peter Jackson’s hit trilogy.

And five actors who played members of the famed Fellowship had a lot fun with their reunion, reenacting the first big battle scene… with silverware.

Also Read: 'Lord of the Rings' 15th Anniversary: 15 Facts About 'Fellowship of the Ring' (Photos)

Dominic Monaghan, who played Merry, posted pics on Twitter of him meeting up with Billy Boyd, a.k.a. Pippin. They were joined by Viggo Mortensen and Orlando Bloom, who played the warriors Aragorn and Legolas, respectively, and Frodo Baggins himself, Elijah Wood.

Along with posing for selfies to the delight of “LOTR” fans everywhere, the group joined together for a picture of them holding forks and knives out like swords at the ready. Monaghan captioned the pic with the famous phrase, “They have a cave troll!,” calling back to the famous battle scene between the Fellowship and a horde of orcs in the mines of Moria.

Also Read: 14 Actors Who Were Almost Cast in 'The Lord of the Rings: The Fellowship of the Ring'

If you’re wondering what the stars of “LOTR” are up to now, they have a lot of recent work you can check out. Mortensen got a surprise Oscar nomination last week for his performance in “Captain Fantastic.” Wood most recently starred as an eccentric metalhead turned vigilante who teams up with a mild-mannered lady to “get rid of a**holes” in society in “I Don’t Feel At Home in This World Anymore,” which won the U.S. Dramatic Prize at Sundance this week. (You can see it on Netflix later this month.)

Orlando Bloom will be returning to his other claim to fame, “Pirates of the Caribbean,” in the Disney series’ fifth installment, “Dead Men Tell No Tales,” due out this summer. As for Monaghan, you can see him in the darkly humorous SXSW thriller “Pet,” in which he plays a stalker who becomes obsessed with and captures a girl named Holly.

And if you want to experience the “Lord of the Rings” trilogy all over again, you can get the extended edition box set on Blu-Ray in stores now.