Lorde has apologized for an Instagram post that showed a bathtub and featured lyrics from Whitney Houston’s “I Will Always Love You” that sparked online outcry since the pop singer was found dead in a bathtub in 2012.

“Extremely, extremely poorly chosen quote,” Lorde wrote on Thursday as she removed the offending post within several hours. “I’m so sorry for offending anyone — I hadn’t even put this together I was just excited to take a bath. I’m an idiot. Love Whitney forever and ever. Sorry again.”

In the post, the pop star appeared to be thrilled to have a day off from her current Melodrama tour, but it ended up causing a different type of drama given the nature of Houston’s death at the Beverly Hilton on the eve of the Grammys in February 2012. 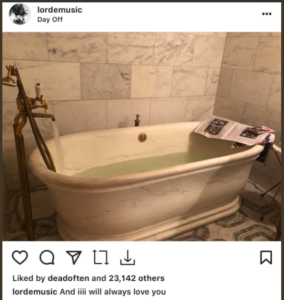 Houston’s cover Dolly Parton’s “I Will Always Love You” was from the soundtrack to the 1992 film “The Bodyguard,” which she starred in with Kevin Costner.

The song was a bona fide hit, spending 14 weeks at number one on the Billboard Hot 100 chart, which made it one of the best-selling singles of all time.

Check out Lorde’s apology below: 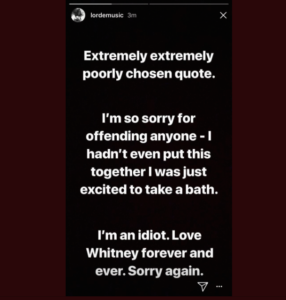