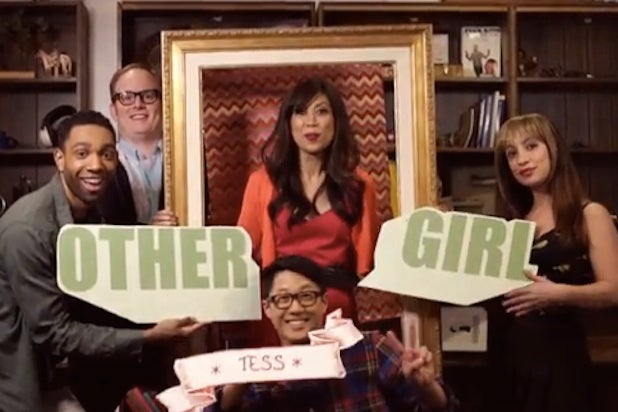 Tess Paras is not going to play “the white girl’s nerdy friend” anymore.

The actress, who’s appeared in shows like “Grimm” and “Weeds,” skewered Hollywood’s stereotypical pigeonholing of actresses of color in a cutting new parody of Lorde’s “Royals,” called “Typecast.”

“This video is inspired by my real life as an actor in every way, particularly my experience as a Filipino-American actor,” she told TheWrap. “In that casting office, my name always confuses people because it’s not an East Asian name, so I threw in that joke at the top of the sketch. Often, I’ll audition for a role that’s based on a model minority stereotype – a line or two as the nurse — and it’s just as common that my actor friends of color audition as a criminal or a domestic worker.”

In the video, Paras lambastes the many clichéd roles of women of color and even zings the casting in “New Girl.”

You know what would be cooler
Cooler
If I got my own series
And your own white friend,
Brown friend, beige friend, yellow friend
Submit all ethnicities

Paras’s criticism of Hollywood homogeneity is backed up by various studies.

According to the most recent casting statistics report released by the Screen Actors Guild in 2009, the overall number of roles performed by actors of color went down in 2008 from 29.3 percent to 27.5 percent. Actors and actresses in 2008 were 72.5 percent white, 13.3 percent African-American, 6.4 percent Latino-Hispanic, 3.8 percent Asian-Pacific Islander, 0.3 percent Native American and 3.8 percent other or unknown. A more recent report by UCLA’s Ralph J. Bunche Center for African American Studies in 2014 shows the proportion of female and minority actors, writers, directors and producers in films and TV ranges from just one-twelfth to one-half of their actual population percentage.

“All actors of color do what we can to keep a smile on our face to keep doing what we love and be employed as storytellers,” Paras said. “But I know  — and audiences know, given the success of my YouTube video — that there’s room to tell stories that reflect what the real world looks like on television.”