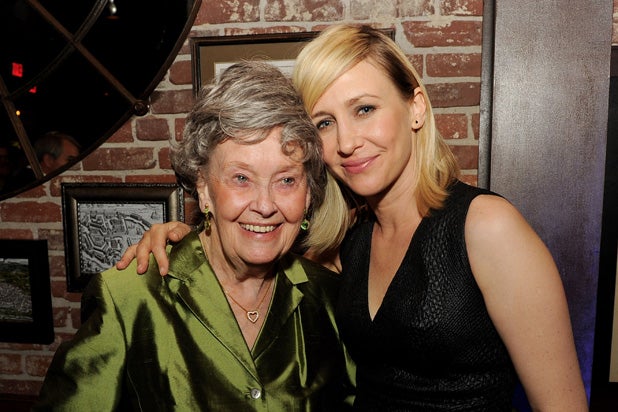 Lorraine Warren, the famed investigator of paranormal activity who researched the “Amityville Horror” hauntings and was the subject of James Wan’s film “The Conjuring,” has died. She was 92.

Warren passed away “quietly and peacefully” in her sleep Thursday night, according to Facebook posts by Warren’s grandson Chris McKinnell and the New England Society for Psychic Research.

“She lived her life in grace and cheerfulness,” actress Vera Farmiga (above right), who portrayed Warren in “The Conjuring,” wrote on Twitter. “She wore a helmet of salvation, she dawned her sword compassion, and took a shield of faith. Righteousness was her breastplate, and she has touched my life so. Love you Lorraine. You’re waltzing with Ed now.”

Along with her husband Ed, who passed away in 2006, Warren was a self-professed clairvoyant and light trance medium who wrote several books on demonology. She and Ed together founded the New England Society for Psychic Research in 1952, which is the oldest ghost hunting group in the region. Some of her famous investigations included the Annabelle doll, the Enfield Poltergeist, the Amityville Horror, and the Perron family, among others.

The two also maintained the Warrens’ Occult Museum in the back of their home Monroe, Connecticut, which houses many of the artifacts the Warrens collected in their studies.

In the 2013 film “The Conjuring,” Warren served as a consultant on the story and even made a cameo in the film. Their studies have resulted in over a dozen “Amityville Horror” spinoff films and five films in “The Conjuring” universe, including “Annabelle” and “The Nun.”

My dear friend Lorraine Warren has passed. From a deep feeling of sorrow, a deep feeling of gratitude emerges. I was so blessed to have known her and am honored to portray her. She lived her life in grace and cheerfulness. She wore a helmet of salvation, she dawned her sword… pic.twitter.com/Kn2E6ZO9fL