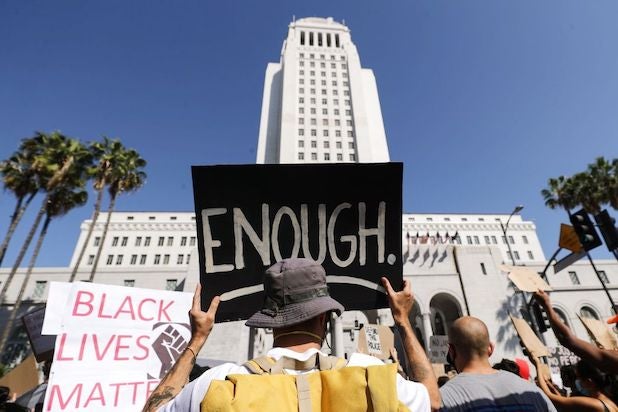 A Los Angeles City Council budget meeting on Monday heard caller after caller dialing in to demand that the council defund the police and adopt the People’s Budget LA — a proposal created by a coalition led by Black Lives Matter Los Angeles.

Earlier this month, following protests sparked by the killing of George Floyd and demands from activists that the city cut funding to the police, Mayor Eric Garcetti said a planned seven percent increase in funding for the LAPD would be canceled and that the city would look to make $100-150 million in cuts to the police.

During Monday’s meeting, the city council’s budget and finance committee heard from organizers with Black Lives Matter LA to advocate for the People’s Budget, which would reduce the allocation of funding to the LAPD to nearly six percent and allocate the most funding to “Universal Aid and Crisis Management,” which the budget proposal has defined as resources that support “housing, food, healthcare, economic assistance and emergency relief.” The mayor’s budget first proposed in April would have allocated 53.8% of the general fund toward the police.

“We’ve been calling for the defunding police for at least five years, but this is a moment where the world has cracked opened and you all have the opportunity to really be courageous and do something different in the city of Los Angeles,” said Melina Abdullah, a co-founder of Black Lives Matter LA and professor at California State University, Los Angeles. “Take advantage of the moment.”

Later, the council members opened the meeting up for public comments shortly after noon and heard from residents until just after 2 p.m.

Tune in to the meeting here.