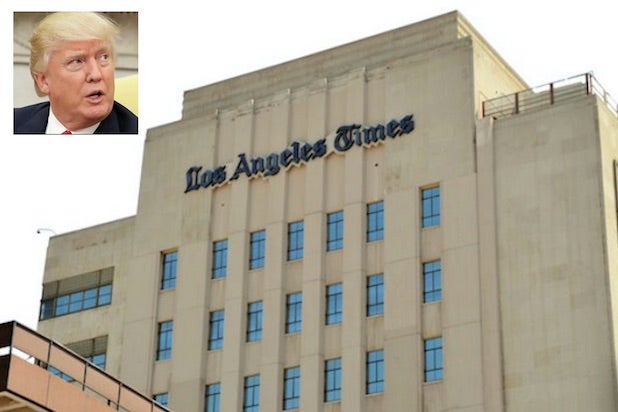 The editorial board at The Los Angeles Times published a searing column titled “Our Dishonest President” on Sunday, heavily criticizing Donald Trump and his first two months in office.

“It was no secret during the campaign that Donald Trump was a narcissist and a demagogue who used fear and dishonesty to appeal to the worst in American voters,” the column begins. “The Times called him unprepared and unsuited for the job he was seeking, and said his election would be a ‘catastrophe.'”

“Still, nothing prepared us for the magnitude of this train wreck. […] In a matter of weeks, President Trump has taken dozens of real-life steps that, if they are not reversed, will rip families apart, foul rivers and pollute the air, intensify the calamitous effects of climate change and profoundly weaken the system of American public education for all.”

The column — the first in a four-part series that will continue in the Times’ op-ed section through Wednesday — lambasted Trump for his executive orders calling for rollbacks on government regulations and a dismantling of Barack Obama’s policies to combat climate change. It noted that such moves would have been seen in a similar fashion had a more established Republican like Marco Rubio or Ted Cruz been elected President. Their chief criticism of Trump was something, they argued, much more unique to the billionaire businessman.

“What is most worrisome about Trump is Trump himself,” The Times wrote. “He is a man so unpredictable, so reckless, so petulant, so full of blind self-regard, so untethered to reality that it is impossible to know where his presidency will lead or how much damage he will do to our nation.”

In the upcoming installments of this series, the Times says it will focus on Trump’s “shocking lack of respect” for government institutions, his “utter lack of regard for the truth” — namely through his claim that Obama ordered a wiretap of Trump Tower — and his “scary willingness to repeat alt-right conspiracy theories,” which the newspaper traces back to his stated belief years ago that Obama was not born in the United States.

“This nation survived Andrew Jackson and Richard Nixon. It survived slavery. It survived devastating wars. Most likely, it will survive again,” the column concluded. “But if it is to do so, those who oppose the new president’s reckless and heartless agenda must make their voices heard […] All of us who are in the business of holding leaders accountable must redouble our efforts to defend the truth from his cynical assaults.”

You can read what the L.A. Times editorial board had to say here.