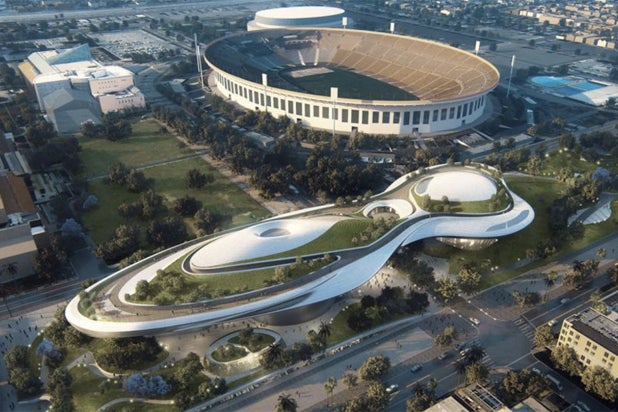 The City of Los Angeles has won the $1 billon George Lucas museum over the filmmaker’s hometown of San Francicso.

L.A. Mayor Eric Garcetti confirmed the news Tuesday on his official website, saying the massive project will be housed in a complex in the city’s Exposition Park area, a stone’s throw from the iconic Los Angeles Coliseum and Lucas’ alma mater, USC.

The museum will host an extensive art collection owned by Lucas and wife Mellody Hobson, which several reports estimate is worth $400 million.

The 275,000-square-foot Lucas Museum of Narrative Art, designed by architect Ma Yansong, will also house memorabilia from films ranging from “The 10 Commandments” to Lucas’ own “Star Wars” and the “Indiana Jones” series.

Also Read: George Lucas on Carrie Fisher: 'She Was Our Great and Powerful Princess'

“Thanks to George Lucas and Mellody Hobson, millions of Angelenos and visitors will enjoy an extraordinary collection anchored in storytelling — an art that carries so much meaning in the history and legacy of Los Angeles,” Garcetti said.

Lucas has spent close to a decade trying to build a permanent home for his art and memorabilia collection, which includes works by Norman Rockwell, N.C. Wyeth and R. Crumb. Plans to build a museum in San Francisco’s Presidio park and on Chicago’s Lake Michigan stalled due to opposition from preservationist groups.

The museum’s board vetted both Los Angeles and a new site on Treasture Island in San Francisco Bay, but the L.A. location won out.

The decision to locate in Los Angeles is a boon for the city — especially since Lucas has said he plans to self-fund the cost of building the project, and also establish a $400 million endowment for its maintenance.

“Art exists to inspire, to move, to educate, and to excite. Thanks to George Lucas and Mellody Hobson, millions of Angelenos and visitors will enjoy an extraordinary collection anchored in storytelling — an art that carries so much meaning in the history and legacy of Los Angeles.

L.A. is gaining a new jewel with the breathtaking Lucas Museum of Narrative Art — and its presence here means that a day at Exposition Park will soon bring unrivaled opportunities to be immersed in stories told on canvas and celluloid, be moved by the richness of African-American history and expression, be awed by the wonders of science and the natural world, take a journey to the world of space exploration, and sit in the stands for a world-class sporting event.

I believed in the vision for the Lucas Museum, and we went after it with everything we have — because I know that L.A. is the ideal place for making sure that it touches the widest possible audience. I am deeply grateful to Mellody and George, and to our educational, governmental, and cultural leaders for their extraordinary support in helping us bring the museum home. Now it’s time to build the vision.”