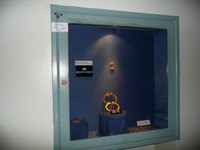 I travelled a very long way to get this photo of the rarest of antiquities. And it's a fake. Therein lies a disturbing tale. This is the museum in Usak, a small city in central Turkey, which houses the treasures of King Croesus in 6th Century BC, a cache of 363 gold, silver and other precious things. It is known as the Lydian Hoard. The hoard was once held by The Metropolitan Museum in New York. But after Turkey sued the museum in the 1980s, the museum agreed to its return. The hoard has been here in this small town since 1995, where it was found, and where very few ever see it. So imagine the general shock when Turkey revealed last year that the masterpiece of the Lydian Hoard, a golden broach (click on photo to see it, it's TINY) 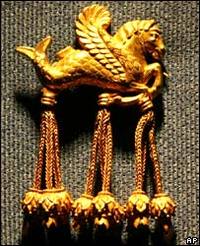 in the shape of a winged horse, was a counterfeit. Someone had stolen the original, and replaced it. Who would do such a nefarious thing? You will never guess: the museum director is accused of the crime. I spent this week unravelling this dramatic tale, and yesterday in Usak itself, following the trail to its home. The director sits in jail. A fake sits in the museum (unlabelled, by the way). Usak is ashamed. And the debate over the proper place for antiquities continues. The hoard was looted, illegally taken and shamefully acquired by the Met. And yet, when finally put in its 'proper' home, the chef d'oeuvre of the Lydian Hoard is, it seems, gone forever.