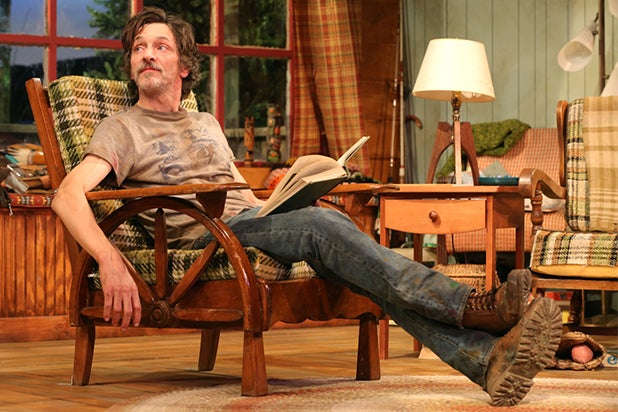 David Auburn takes a step backward to safer ground with his new play, “Lost Lake,” which opened Tuesday at MTC’s Center Stage 1. The playwright, who won a Pulitzer Prize for “Proof,” followed that success with a sprawling bio-play, “The Columnist,” about the in-the-closet D.C. pundit Joseph Alsop. A big, complicated story spread out over several years with many characters, it confused the critics, and the play’s unsympathetic hero left no easy spot for the audience’s sympathies to take refuge.

“Lost Lake” is much lighter lifting: a simple two-character drama about a city mom, Veronica (Tracie Thoms), who rents a rundown cabin in the woods from a creepy guy named Hogan (John Hawkes). She, her kids, and their playmate just want to have a pleasant vacation in the woods. Sound familiar?

In structure, “Lost Lake” resembles many other two handers, especially the recent “Annapurna,” by Sharr White, another MTC alum. Once again, two dissimilar types meet in a remote place, they bicker, there’s an emotional crisis, secrets are revealed, and, finally, a rapprochement — all achieved in under 90 minutes.

Auburn’s writing is at his best in the opening meet-and-bicker scenes of “Lost Lake.” Hogan asks too many questions, and it’s soon clear he can’t deliver on his promises to fix up the cabin. Thoms’s specialty as an actor is expressing simmering exasperation, and anyone who’s experienced even one unsuccessful conversation with a landlord/contractor/realtor will immediately be hooked. And who wouldn’t empathize when the bad landlord is Hogan as played by Hawkes?

“Lost Lake” marks Hawkes’s New York stage debut, and even those theatergoers who know his TV and film work will be fascinated by him in the flesh. What flesh?! First off, he’s looks like Wile E. Coyote. Hawkes’s face is gaunt to the point of haunted, and his jeans stand up on dried sweat alone.

Here’s a great performance — and Hawkes hasn’t even spoken a word. Fortunately, Hogan talks a lot, Veronica not so much. And you know why she doesn’t want to engage with him the second Hawkes stops addressing Thoms to cast his gaze right at you. His eyes may be crystal blue, but there’s nothing but madness at midnight if he ever shuts them. Which he doesn’t. The man does not blink. Ever.

Set designer J. Michael Griggs delivers a coup de teatre in the handling of props that, in a truly shocking way, reveals just how deep a hole this man has dug for himself out in the woods. It’s stunning theater, and the audience jumps.

Hogan’s descent is beautifully calibrated in Auburn’s writing, and Hawkes signals each rung downward with the smallest, most gradual of steps.

Thoms isn’t nearly as effective in charting her journey, and while her early scenes of exasperation are memorable, she doesn’t expand on that emotion when Veronica opens up to Hogan to expose her own personal tragedies. Some of that deficiency is in Auburn’s writing, or, to be more precise, in the fact that Veronica, the far more discreet and guarded character, isn’t given the necessary moments to reveal her vulnerabilities. It makes sense that Hogan’s relatives don’t visit him. But Veronica exists in a close community that is constantly, and distractingly, kept offstage.

The stresses in Veronica’s career back in the city would come into sharper focus if the character interacted on stage with her children and their friend, whose concerned father makes a frantic phone call to the cabin at one point in the play to see if his own daughter is all right. It’s too bad Auburn wrote Veronica such a convincing telephone speech that the father decides not to visit. Her powers of persuasion are not good for the play. Later, it turns out this off-stage dad is a possible love interest. There’s nothing more distressing to kids than having an unemployed parent (“Mommy, can we afford this vacation”), and always having these children off-stage swimming or sleeping is a dramatic opportunity missed.

In an after-talk at MTC, the actors revealed that Auburn, on the suggestion of director Daniel Sullivan, cut a child role from the script before rehearsals began. And they say Elia Kazan had a questionable effect on “Cat on a Hot Tin Roof.”

The Broadway legend made her stage debut in 1944, and racked up a number of awards and nominations over a show-business career spanning more than six decades

Helen Ferguson in "A Farewell to Arms":
Stritch co-starred with Rock Hudson and Jennifer Jones in this 1957 adaptation of Ernest Hemingway's World War I novel.
View In Gallery